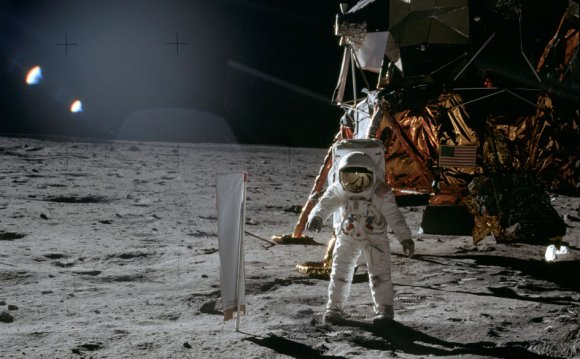 ‘NASA can do 90% of the job, so why can’t a little movie magic do the rest’ … Operation Avalanche

If Matt Johnson ever runs into Buzz Aldrin there’s a good chance he’ll come away from that meeting with a broken jaw. And with good cause. Johnson, the Canadian trickster behind the dark, engaging quasi-comedic school shooting picture The Dirties, takes as his next “found footage” target the American space program, and one of our juicer conspiracy theories: that man never walked on the moon.

As a reasonable human being I’ve given this would-be hoax about as much consideration as the Loch Ness monster, but it is to Johnson’s credit that he makes a fairly plausible case. By the end of Operation Avalanche one is left thinking that a CIA-led scheme could have at least been feasible. And, if it did happen (not that I’m saying it did!) it probably looked a heckuva lot like this.

Operation Avalanche exploits the found footage genre by making its heroes Matt Johnson (again playing “himself” with his fellow Dirties cronies Owen Williams and Josh Boles) film-makers with a liberal shooting policy. “Whenever we’re talking, film us, ” Johnson orders his two mostly-silent cameramen. They represent a new group of ambitious recent Ivy League grads, the CIA’s “A/V program, ” and through a produced pitch reel we learn that NASA, currently in the thick of working towards Apollo 11, thinks they have a Soviet mole somewhere in their shop. Johnson and Williams convince their bosses to let them go to Houston impersonating a documentary crew, while their real objective is to poke around and try to find whoever is leaking information.

After some amusing interviews (and great sequences involving antiquated film-making equipment) our guys discover something far worse. The Lunar Module won’t work. NASA can go to the moon, but the astronauts can’t come back, at least not in time to make the fallen President Kennedy’s “this decade” pledge come true.

But Matt Johnson (the character, and also the film-maker) has an active imagination. NASA can do 90% of the job, so why can’t a little movie magic do the rest? With an abundance of drive but not a scruple to his name, he spearheads a plot to recreate the lunar landing on a sound stage.

While Operation Avalanche has its share of humour, the clever problem-solving the crew devises is extraordinary, and considerably sharper than the James Brolin-OJ Simpson vehicle Capricorn One. The second act of the film is like the “we gotta find a way to make this fit into the hole for this using nothing but that” scene from Apollo 13, but for entirely immoral purposes. Those familiar with the ramblings of “lunar truthers” know that much of the literature centers on Stanley Kubrick allegedly masterminding this charade. Operation Avalanche’s version shows how the great director actually did provide some crucial help, just without knowing it. (Operation Avalanche also visits the set of 2001, in a particularly amusing sequence.)

While the movie, shot on video but with 16mm lenses and processed to celluloid, sticks mostly to an overheard conversational style, the third act ramps up the action in some truly thrilling ways. Johnson isn’t going evoke the great formalist of late 1960s cinema and not try his hand, too. The ending doesn’t quite land the gut punch it’s hoping for, but this is more about fun than about exposing deep, nefarious truths. At least, I think it is.