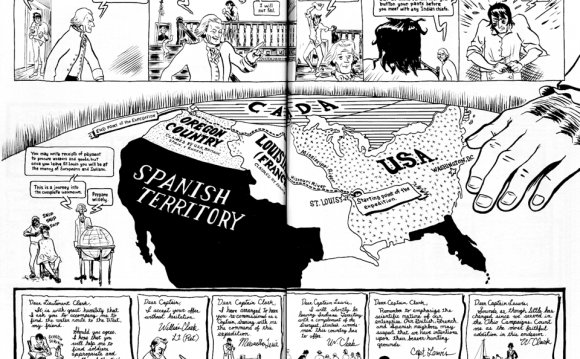 American-made from imported ingredients—One significant medicine was not imported–the famous Bilious Pills of Benjamin Rush. (They were actually anti-bilious pills. A patient was said to be "bilious" when supposed poor flow of bile in the body caused a complex of symptoms including constipation, headache, and lassitude.)

Dr. Rush had expressly indicated to Lewis that when one of his men showed the "sign of an approaching disease . . . take one or two of the opening pills." Nicknamed "Rush's Thunderbolts, " the pills were reputed to contain 10 grains of calomel and 10 to 15 grains of jalap, both potent laxatives. By opening up the bowels, Rush believed that the body would then expel the excess bile or other matter causing illness. (With active ingredients weighing at least 1295 mg, these would have been large pills indeed. A common aspirin tablet
weighs 5 grains or 1/4 the weight of the "thunderbolts.")

A milder version of Rush's Pills remained an official compound until the 1940s. Here is the recipe for Compound Mild Mercurous Chloride Pills that appeared in the 1946 edition of the National Formulary (Washington, DC: American Pharmaceutical Association, 1946).

This "mild" formula was nontheless a big gun, combining four purgatives of slightly differing qualities. Early 19th-century physicians regarded jalap as "active" and "rapid." Gamboge, from Cambodia, was a "drastic" and "powerful" purge. Calomel (mercurous chloride) was believed to stimulate the liver and the gall bladder, although the opposite was true. Colocynth, or bitter apple, from India and Saharan Africa, was termed a "drastic" and "powerful" purge. According to the United States Dispensatory of 1918, the compound extract of colocynth "combined with calomel, extract of jalap, and gamboge. . . forms a highly efficient and safe cathartic, especially useful in congestion of the portal circle and torpidity of the liver."

By the 1960s, newer drugs and concerns about heavy metal poisoning led to the disappearance of mercury compounds for internal use. Only a few external mercury-containing antiseptics remained into the 1990s.

The two active ingredients had widely different sources and histories. Calomel (mercurous chloride) had entered medical practice in the 1600s as a milder and more palatable mercury compound. The liquid metal mercury had been applied externally in different forms since ancient times to treat a variety of skin lesions. A confluence of factors led to its rise as an internal medicine: the appearance of syphilis in Europe and the increasing influence of alchemy and chemistry on medical theories. The Swiss physician Paracelsus (1493-1541) and his followers argued that some of the new chemicals coming out of laboratories could better treat the diseases of a new age with a "new world." The apparent success of mercury compounds against syphilis helped to spur the growing reputation of chemical medicines. Like almost all of the other fine chemicals in the medicine chests, the calomel came to the young United States from London suppliers.

By 1800, calomel was widely accepted for its general powers as an "alterative, " i. e., medicine that altered the overall constitution of the body. In large doses, calomel acted quickly as a laxative; in small doses over time, it produced what we today would characterize as mercury poisoning–abundant salivation, sore gums, loosening of teeth, metallic halitosis, and discolored stool. At this level, the drug was obviously "working" and had the power, in theory, to eliminate syphilis from the body. Because of its dual activity, calomel was included in both Rush's Pills–eliminating excess bile through purging–and by itself in powder form, where it could be given in small doses over time to combat syphilis.

The plant Thomas Woodville called Convolvulus jalapa is now classified in the genus Ipomoea (the Greek name of a weedy vine we call bindweed), belonging to the family Convolvulaceae—from Latin convolva, to twine around. The principal species of Ipomoea with known medicinal value as a cathartic or purgative is jalapa, named for a town 120 miles southeast of Oaxaca on the isthmus of Mexico.