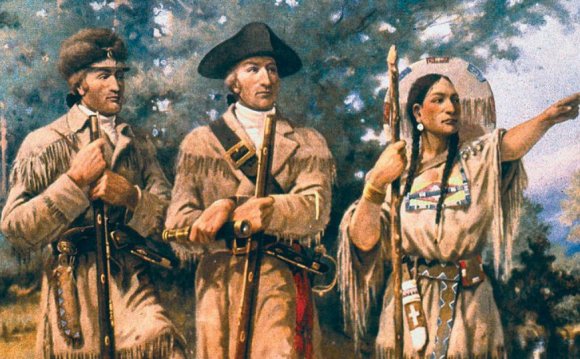 It seems strange that an adventure as exciting as the Lewis and Clark expedition, with such compelling themes as undying friendship and American triumph over the harshness of nature, has made so little impact in Hollywood. Lewis and Clark movies are sparse on the silver screen. I know of only one feature film that spotlighted the expedition. This was the 1955 flick “The Far Horizons, ” directed by the Polish-born Rudolph Maté.

A quick search of Maté’s credits reveals no classics, and “The Far Horizons” is, alas, representative of his body of work. Fred MacMurray stars as Meriwether Lewis, better known as “Merne” (you can just imagine the screenwriters fretting over that sissy first name!).

The action opens in 1803, when Jefferson calls “Merne” home to inform him about the Louisiana Purchase and offer him command of the expedition (his exact words are “Whaddyasay?”). As Merne prepares to tear himself away from his lady love, Julia Hancock (Barbara Hale of Perry Mason fame), his old Army buddy Bill Clark (Charlton Heston) shows up and caddishly beats his time. Nonetheless, duty calls, and the pair round up a bunch of men and set off to explore the new land.

Charlton Heston’s Clark hates Indians, and he’s ready to wipe out any tribe that stands in their way…but little does he dream that the biggest danger will be to his heart. Before long, a beautiful Indian maiden named Sacagawea (Donna Reed) saves the Corps of Discovery from attack by the Minnetarees, and she and Clark begin a schmaltzy romance.

Needless to say, history goes by the boards. Churlish Clark gets the credit for discovering the Great Falls, only to decide to chuck it all for his love for Sacagawea. The best scene in the movie comes when crusty Sergeant Gass (William Demarest, who would later play opposite MacMurray as Uncle Charley on “My Three Sons”) breaks up a fistfight between Merne and Bill and chews them out for their childish misbehavior. One only wishes Robbie, Chip, and Ernie were there to enjoy the show.