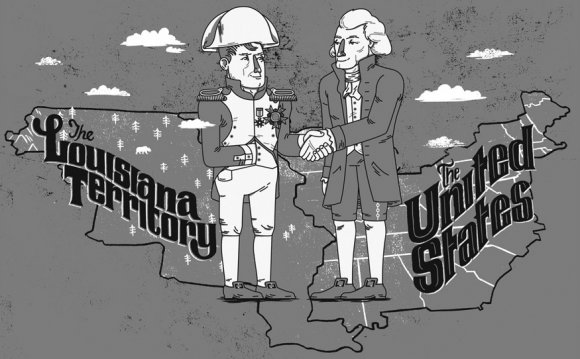 Although Thomas Jefferson came to power determined to limit the reach of the federal government, foreign affairs dominated his presidency and pushed him toward Federalist policies that greatly contrasted with his political philosophy. The first foreign episode involved Jefferson's war with the Barbary pirates. For the previous century or so, Western nations had paid bribes to the Barbary states, which would later become Morocco, Algeria, Tunis, and Tripolitania, to keep them from harassing American and merchant ships. When the Pasha of Tripoli raised his demands in 1801, Jefferson refused to pay the increase, sent warships to the Mediterranean, blockaded the small nation, and tried unsuccessfully to promote a palace coup in Tripoli. This was one of the first covert operations in American history. The war ended with agreements that involved one last payment of tribute, at least to Tripoli. Jefferson's action on this matter caused him to rethink the need for a well-equipped navy and halted his move to reduce the force to a mere token size.

When Jefferson learned that Spain had secretly ceded Louisiana to France in 1800, he instructed his ministers to negotiate the purchase of the port of New Orleans and possibly West Florida. Jefferson strategically made this move in order to insure that American farmers in the Ohio River Valley had access to the Gulf of Mexico via the Mississippi River—the river was a key to the farmers' economic well-being, as they needed a vent for their surplus grain and meat. Even before the French took over Louisiana, the Spaniards had closed the Mississippi River in 1802. While Jefferson was known to be partial to the French, having the Emperor Napoleon's driving interests for world domination next door was not an attractive prospect; thus, Jefferson acted swiftly.

To his surprise, Napoleon, needing funds to finance a new European war with England, offered to sell Jefferson most of the land from the Mississippi River to the Rocky Mountains. His price of $15 million amounted to approximately four cents per acre for 828, 000 square miles, doubling the size of the nation. Although Jefferson understood that the U.S. Constitution said nothing about the purchase of foreign territory, he set aside his strict constructionist ideals to make the deal—Congress approved the purchase five months after the fact. Jefferson then outfitted a twenty-five man expedition to explore the new lands. Led by his secretary, Meriwether Lewis, and Army Captain William Clark, these adventurers took two and one-half years to cover 8, 000 miles. They traveled up the Missouri River, across the Continental Divide, and down the Columbia River to the Pacific before retracing their steps to St. Louis. The expedition is considered one of the great exploratory quests in human history.

Several weeks after buying Louisiana, Napoleon declared war on Great Britain. At first, the European fighting benefited the United States since Americans functioned as the merchants carrying supplies to the warring powers. Consequently, between 1803 and 1807, total U.S. exports jumped from $66.5 million to $102.2 million. This service provided by American ships often involved reexporting, meaning European and colonial goods were picked up by American ships for transport to U.S. ports where they were reloaded onto other U.S. ships for export to Europe. During the same four-year period, reexports quadrupled, rising from $13.5 million to $58.4 million. Then, the bottom fell out of the trade industry as England and France each independently outlawed virtually all American commerce with their opponent.

The British navy also began seizing American ships with cargoes bound for Europe and impressing American sailors into the Royal Navy. The problem partly stemmed from the practice of British sailors jumping ship to join U.S. merchant vessels. Thousands of such deserters were considered fair prey by the British navy, which also routinely impressed American citizens on the pretext that they were British deserters, many of whom were in fact just that. Tensions mounted, and in the summer of 1807, the British warship Leopard fired on the American naval frigate Chesapeake, killing three Americans, when the ship refused boarding orders. Cries for war erupted throughout the nation.

Jefferson banned all British ships from U.S. ports, ordered state governors to prepare to call up 100, 000 militiamen, and suspended trade with all of Europe. He reasoned that U.S. farm products were crucial to France and England and that a complete embargo would bring them to respect U.S. neutrality. By spring 1808, however, the Embargo Act that was passed by Congress in December 1807 had devastated the American economy. American exports plummeted from $108 million to $22 million. Economic desperation settled upon the mercantile Northeast. Finally, Jefferson backed off in the last months of his administration, and Congress replaced the Embargo Act with the Non-Intercourse Act, which banned trade with England and France but allowed it with all other countries. Eventually, the trade war would propel America into a fighting war with England during the administration of Jefferson's successor, James Madison.