Effects of the Louisiana Purchase 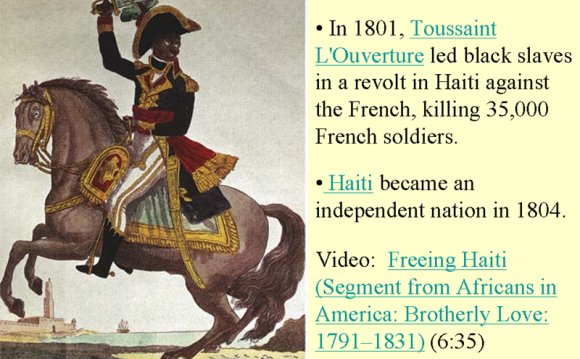 Consequences of the Louisiana Purchase

The purchase of Louisiana Territory from France doubled the size of the United States and made it a continental power. However, it also created tension in Congress about the balance of slave and non-slave states, and it started talk of secession.

In the late 18th and early 19th centuries, the Mississippi River was vital for transporting goods because of its access to the western frontier and the Gulf of Mexico. The center of river trade was New Orleans, a part of Louisiane (or Louisiana Territory) originally ruled by France. In 1762, the French gave Spain control of New Orleans, and the Spanish gave Americans the right to trade in the city.

In 1798, Spain revoked the Americans’ right to trade in New Orleans, which greatly upset U.S. officials. Soon afterwards, Spain returned control of Louisiana to France with the agreement that Spain would continue administering New Orleans and France would not sell the territory. The treaty was secretly signed in 1800.

Because the Mississippi River was becoming increasingly important as American settlers moved west, U.S. officials continued lobbying Spain for the right to trade in New Orleans. However, when France’s archenemy–Great Britain–informed the U.S. of the secret treaty between France and Spain, President Thomas Jefferson dispatched envoys to France to make an offer to buy New Orleans.

Napoleon Bonaparte ruled France, and he had initially sought to build a western empire headquartered in the Louisiana Territory. However, the French army in the Caribbean had been nearly wiped out by yellow fever while trying to put down a slave rebellion in Saint-Domingue (now Haiti). This deprived the French access to the rich Caribbean sugar plantations. Without profits from those plantations, Louisiana held little value to Napoleon.

Moreover, Napoleon was planning to conquer Europe, which required both troops and money. As Napoleon’s focus shifted to Europe, the Western Hemisphere was no longer a priority to him. As a result, Napoleon impulsively offered to sell not only New Orleans but the entire Louisiana Territory.

After learning that control of New Orleans had gone back to France, President Jefferson dispatched Robert Livingston to negotiate the U.S. right to trade in the port city. Through Livingston, Jefferson hinted that the U.S. could ally with Britain against the French, thus putting more pressure on France to open New Orleans to the U.S.

When negotiations faltered, Jefferson sent future President James Monroe to aid Livingston. The French had expelled Monroe on his last diplomatic mission to France, but Jefferson sent him again to show that the president meant business.

Jefferson directed Livingston and Monroe to make an offer to buy both New Orleans and Spanish Florida for $10 million. While initially reluctant, the French changed their stance after the yellow fever epidemic ravaged Saint-Domingue and Napoleon launched his European war. On April 11, 1803, French Treasury Minister Francois de Barbe-Marbois offered the U.S. envoys all of Louisiana Territory. This stunned the envoys, who had only been authorized to negotiate for New Orleans and Florida.

The French offered Louisiana for $15 million (or less than three cents per acre), paid with $3.75 million in French debt to the U.S. and $11.25 million in cash. Fearing that Napoleon could change his mind at any time, Livingston and Monroe quickly accepted the offer. The purchase treaty was drafted on April 30 and signed on May 2. However, external forces threatened to destroy the deal.

In the U.S., many Federalists who opposed Jefferson accused him of hypocrisy. Jefferson prided himself on his strict interpretation of the Constitution, which had no provision enabling a president to buy territory. Some argued that had a Federalist effected the purchase, Jefferson surely would have objected on constitutional grounds.

Federalists also objected because the purchase tied the U.S. closer to France when most Federalists favored closer ties to Britain. Others, primarily in New England, feared that the territory would eventually be carved into several southern pro-Jefferson states. Those states would most likely allow slavery, thus upsetting the balance between slave and non-slave state representation in Congress. Some New England Federalists even considered seceding from the Union and forming a northern confederacy.

Nothing in the Constitution authorized either Jefferson or his envoys to make such an enormous purchase with taxpayer money. Moreover, nothing in the Constitution enabled the federal government to grant U.S. citizenship to the many French nationals living in the territory. And ironically the purchase was made with proceeds from U.S. bond sales begun by Jefferson’s archrival, Federalist Alexander Hamilton, in a sale that Jefferson had deemed unconstitutional.

Jefferson later admitted he had stretched his power “till it cracked” to buy Louisiana. He recognized that such an acquisition could erode states’ rights by enhancing executive power beyond the constitutional scope. On the other hand, he saw a French presence in Louisiana as a threat to free U.S. trade in North America. As a result, Jefferson proceeded with sending the treaty to the Senate for ratification.

The Louisiana Purchase Treaty outraged Spain. Under the secret treaty with France, the French had pledged not to sell New Orleans to any foreign country. But that is exactly what Napoleon did by selling New Orleans and all of Louisiana to the U.S.

Moreover, since Spain and France had shared the boundaries between Louisiana and Florida in the past, the exact boundary lines were unclear. Spain argued that West Florida extended to the Mississippi River, while the U.S. maintained that Louisiana began west of the Perdido River and stretched all the way to the Rio Grande River and the Rocky Mountains, including the Spanish colony of Coahuila y Tejas (now Texas). This sparked an international conflict that ultimately resulted in the U.S. acquiring Florida from Spain nearly two decades later.

The treaty reached Washington on July 14, 1803. In the U.S. House of Representatives, a motion to deny the purchase request failed by only two votes. Some Federalists even tried proving the land still belonged to Spain and not France, which would have made the purchase invalid.

Nevertheless, the Senate ratified the treaty by the necessary two-thirds majority, 24 to 7. The next day, Congress authorized President Jefferson to possess the land and set up a temporary military government. France transferred New Orleans to the U.S. on December 20 at The Cabildo. France transferred the Louisiana Territory to the U.S. at St. Louis in a formal ceremony on March 10, 1804.

The territorial boundaries with Spain notwithstanding, the U.S. acquired about 828, 000 square miles of land in the Louisiana Purchase, which included all or part of the present-day states and provinces of Alberta, Saskatchewan, Minnesota, North Dakota, South Dakota, Montana, Wyoming, Colorado, New Mexico, Oklahoma, Kansas, Nebraska, Iowa, Missouri, Arkansas, and Louisiana.

Napoleon declared, “This accession of territory affirms forever the power of the United States, and I have given England a maritime rival who sooner or later will humble her pride.”

While Americans celebrated the vast expansion of their country, the Louisiana Purchase would soon become part of the slavery issue as southern slave states were created from the land just as the New England Federalists had feared. Adding this new southern territory made it clear that slavery would not be ended anytime soon.

How the Louisiana Purchase Worked

Creolization, Louisiana purchase and the Rise of American ...

The Louisiana Purchase (APUSH Remake of "Worth It")