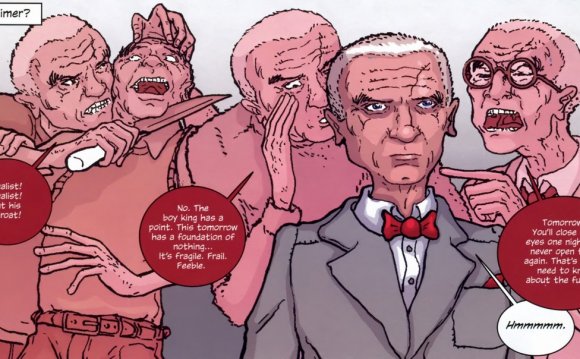 I say, “apparent” because, after having read the first four issues (at least three more are forthcoming), I’m not really sure that’s the best way to sum up what it’s about. It’s really more like, “What if the cast of characters from World War II research and development projects were transposed into a somewhat standard comic book science fiction setting?” Which isn’t quite the same thing.

The plot, so far as I’ve understood it so far (it is not completely linear, which is not in itself a criticism), has something to do with opening up portals between parallel universes, or something along those lines. There are also aliens. And lots and lots of robots.

Which isn’t awful, but I had expected it to be more firmly set during World War II, based on the initial description (and name), but it’s really not. What makes it feel silly is that the bomb, the V-2, and other actual World War II technologies look quite mundane and uninteresting next to cyborg implants, robot androids, all-knowing supercomputers, and, you know, dimensional warp gates. Who cares about “Little Boy” next to all of those?

But if you put that all aside, and regard it instead as a comic book that happens to star otherworldly versions of Manhattan Project characters you know and love, it’s actually kind of fun. The characters often quite inspired and made this atomic historian laugh. It’s clear that Hickman did some research and took the time get really grok some of these figures.

(I should say, explicitly, that there are actually a number of graphic novels/comic books devoted to actual Manhattan Project history. The work of Jim Ottaviani stands out here. I’ll talk about those another time — this post is just about this particularly pulpy contribution.)

J. Robert Oppenheimer has been made literally fractured — his real-life weirdness, inconsistency, and occasional callousness is translated, by the logic of the comic book, into a sociopathic character with multiple personalities. It’s not a flattering depiction — he’s more psychopath than genius — but it’s more interesting than the usual “hero” and “martyr” takes on Oppenheimer. This fractured aspect of his personality is something I’ve commented on before, so I approve of this literary flourish.

Enrico Fermi is a literal alien of some sort (it isn’t yet explained) — a fitting way to explain the enemy alien‘s otherworldly genius, and one which makes the Fermi paradox all the more amusing. Harry Daghlian, the physicist who died after a criticality accident in late August 1945, lives on in the comics as an irradiated skeleton inside of a containment suit. A little poor taste.

General Groves is more boorish, more violent, more unpleasant than ever. I can’t say I’m too thrilled with the characterization — he comes off as a generic Nick Fury, G.I. Joe sort of character. The real Groves was plenty imperial, but he also felt acutely where his power was potentially threatened (by Congress in the postwar, and he knew that the buck stopped with the President). The Groves of the comic is more or less invincible, and that’s unattractive. He’s also seriously in shape, something which, well, the General Groves of our universe was not.

Most perversely, Richard Feynman is… just Richard Feynman. In this universe, he seems (so far) totally normal. Which makes him one of the only characters played straight in the whole series. Funny, no? Feynman as the only straight man, rather than the crazy guy with the bongos.

The art is quite beautiful (as you can see), extremely well-executed, and lushly colored. Pitarra has a real talent for capturing emotions on human faces, and his characters by and large are completely recognizable when compared to their historical analogues (which is no easy thing to pull off, from looking at other drawings of historical figures).