After the Declaration of Independence 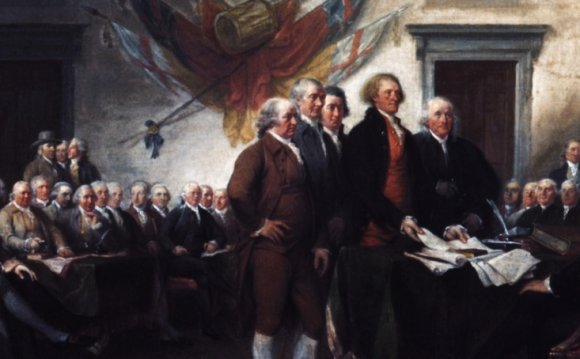 'We hold these truths to be self evident: that all men are created equal; that they are endowed by their Creator with certain inalienable rights; that among these are life, liberty, and the pursuit of happiness.’ These famous words are all that most people remember of the American Declaration of Independence, but the text as a whole is far more complex and subtle than this piece of liberal rhetoric might suggest.

Like many ground-breaking documents in the history of government, the Declaration is firmly planted in a highly specific historical context. The rhetoric of universal human rights occupies only 20 per cent of the 1, 340-word document. Over 60 per cent of it is a detailed list of grievances which the American colonists felt against George III and the British government.

It includes very illiberal attitudes towards black slaves and Native Americans. The British had called upon the slave population of the southern states to rise against their masters and make common cause with the British troops. The Declaration complains that George III has excited domestic insurrection among us, and has endeavoured to bring on the inhabitants of our frontiers, the merciless Indian savages, whose known rule of warfare is an undistinguished destruction of all ages, sexes and conditions.

It is easy to be critical of the Declaration when you read beyond its first two inspirational paragraphs. But the purpose of the historian is to understand, not to criticise, and the real fascination of the document relates to its precise dating, and the diplomatic tight-rope it walks.

The American Declaration of Independence does three main things:

Each of these three has to be set in an historical context if we are to understand or make sense of the Declaration of Independence. Perhaps the most interesting and most important of them is the first, but we shall discuss that last. Let’s look first at why the Americans were discontented at being part of the British empire and why they declared independence when they did. And note that the when is every bit as important as the why.

The Declaration gives a lengthy list of grievances, but neglects to explain the cause. The American colonies had been founded to help expand the British economy and they provided a new society where those anxious to escape from life in Europe could go. Virginia was the first, founded in 1607 and the colonisation of New England by the Pilgrim Fathers followed in 1620. For a century and half, the British government largely ignored the colonies. After his Restoration to the throne in 1660, Charles II tidied up some of their charters and in the 1690s, after the Revolution of 1688-89, William and Mary’s government modernised and codified the way they were governed and administered. But for another half century after that Britain largely ignored the colonies and the colonists enjoyed the freedom which that neglect gave them. It was therefore a shock when, in the middle of the eighteenth century, British governments started to develop a proper imperial policy and wanted to make changes in their relationship with the colonies. In the eighteenth century Britain was engaged in a number of wars against the French which were fought in three theatres: Europe, India and North America. These wars were increasingly expensive. Eventually they bankrupted the French crown and that in turn helped bring about the French Revolution. The British tried to tackle the problem of cost earlier, however, and when the Seven Years War ended in 1763 they looked to the American colonists to contribute. The British army did, after all, defend the colonists from the French and the Native American Indians, or so the British argued, and it was only fair they should help pay.

America the Story of Us - The Declaration of Independence

The Declaration of Independence: Six things you (probably ...

GRIN - After declaration of independence - A new political ...