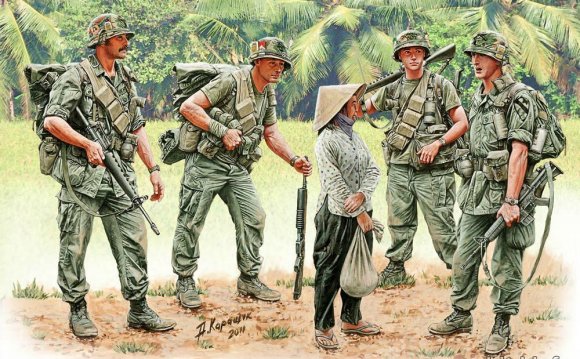 Next we preview the second batch of greens that will be included in the forthcoming Vietnam War release entitled "Dirty Little Wars" - Border Incursion. Shown today are the components of the North Vietnamese Army (NVA/PAVN) opposition force to the recently previewed Navy SEAL/LDDN patrol.

Like the Navy SEAL miniatures the NVA miniatures come with a few additional features. Variant heads dressed predominantly in the quintessential NVA/Viet Cong cloth hat allowing hobbyists to switch out the heads to field a mix of North Vietnamese Regulars and Main Force Viet Cong or to go purely with a Main Force Viet Cong patrol unit altogether. Bare heads suitable for use representing sappers are included and an officers cap similar in style to those worn by the Khmer Rouge are also included for those communist leader models. In addition to the variant heads these miniatures also come with basing effects of their own, in this mix there is an assortment of land mine/booby traps, rice baskets and village clutter, blasted tree trunks and rock formations, nice little features that help spice up any models base.

Shown in the accompanying pic is our first feature of the two new "Downed Pilot" miniatures for use as gaming objectives or for those evasion and escape games. Modelled off of F-4 Phantom pilots these guys are a suitable representation for a large range of aircraft pilots operating in Vietnam.