Main Causes of World War One 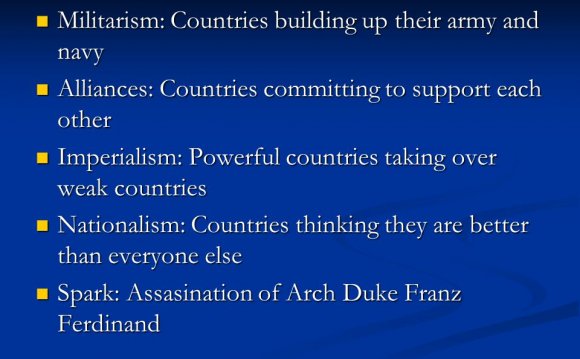 The first world war began in August 1914. It was directly triggered by the assassination of the Austrian archduke, Franz Ferdinand and his wife, on 28th June 1914 by Bosnian revolutionary, Gavrilo Princip.

This event was, however, simply the trigger that set off declarations of war. The actual causes of the war are more complicated and are still debated by historians today.

An alliance is an agreement made between two or more countries to give each other help if it is needed. When an alliance is signed, those countries become known as Allies.

A number of alliances had been signed by countries between the years 1879 and 1914. These were important because they meant that some countries had no option but to declare war if one of their allies. declared war first. (the table below reads clockwise from the top left picture)

Imperialism is when a country takes over new lands or countries and makes them subject to their rule. By 1900 the British Empire extended over five continents and France had control of large areas of Africa. With the rise of industrialism countries needed new markets. The amount of lands 'owned' by Britain and France increased the rivalry with Germany who had entered the scramble to acquire colonies late and only had small areas of Africa. Note the contrast in the map below.

Militarism means that the army and military forces are given a high profile by the government. The growing European divide had led to an arms race between the main countries. The armies of both France and Germany had more than doubled between 1870 and 1914 and there was fierce competition between Britain and Germany for mastery of the seas. The British had introduced the 'Dreadnought', an effective battleship, in 1906. The Germans soon followed suit introducing their own battleships. The German, Von Schlieffen also drew up a plan of action that involved attacking France through Belgium if Russia made an attack on Germany. The map below shows how the plan was to work.

The Causes and War Aims of World War One

Causes of World War One With @newhistoriesmag Vodcast