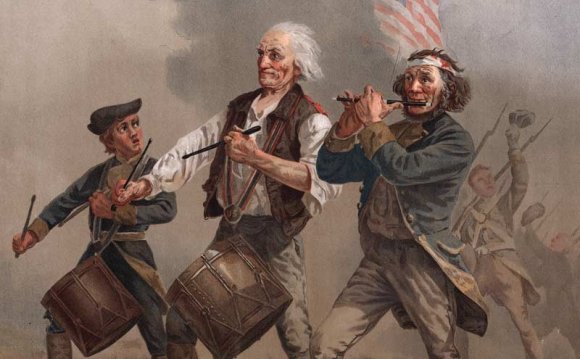 A group of eighth-grade history students in Kenosha, Wisconsin, recently examined the Revolutionary War from both the American point of view and the British perspective. During the course of their project, the kids learned that every argument has two sides. Their teacher learned that there's more than one way to get your point across. This week, Joe Banaszynski shares his experience with scaffolding instruction with Education World readers. Included: What is scaffolding? Plus tips for constructing student learning using a scaffolding model!

People born and raised in the United States rarely think of the American Revolution as anything but a necessary and just war, waged by an oppressed people against a cruel and unreasonable king. Students in Joe Banaszynski's classes at Lance Middle School in Kenosha, Wisconsin, are now aware, however, that every argument has at least two - often equally valid - sides. Banaszynski's students conducted a project in which they learned about the Revolutionary War by considering the issues from both the American perspective and the British point of view.

What the students might not know, however, is that their teacher used a technique called scaffolding to help make the project a success.

Many of us probably think of a scaffold as a temporary framework that supports a building during construction. When the structure is sturdy enough to stand on its own, the scaffold is removed. In an educational sense, scaffolding, in the form of coaching or modeling, supports students as they develop new skills or learn new concepts. When the student achieves competence, the support is removed. The student continues to develop the skills or knowledge on his or her own.

Koos Winnips, the author of Supporting Constructivist Learning through Learner Support On-line, is an expert on educational scaffolding. He defines the process as "providing support to student learning and then retreating that support so that the student becomes self-reliant." Winnips suggests the analogy of learning to swim with a punctured swimming tube. "You learn to swim, " he says, "as the tube slowly deflates.

"Scaffolding, " Winnips explained to Education World, "focuses on active learning and student choice. The technique works especially well with technology-based learning, in which students need to be more self-reliant. Scaffolding allows them to work self-reliantly while receiving adequate support."

Traditionally, educational support in the classroom has been provided by continuous interaction with the teacher. As computer-aided learning becomes more prevalent, experts say, the incorporation of scaffolding into the learning process becomes imperative. Winnips recommends that teachers read Scaffolding Student Learning: Instructional Approaches and Issues, by K. Hogan and M. Pressley (Cambridge, MA: Brookline Books, 1997) to learn more about how the strategy works.

"The idea behind scaffolding, " Joe Banaszynski told Education World, "is to take one lesson and use it to build another lesson. In my Revolutionary War project, as students studied the Causes Of The Warin their textbooks, they recorded each British action and each colonial reaction - building one on the other. I then paired up the students and had each pair research just one cause of the war, detailing both the British actions and colonial reactions. All the causes, actions, and reactions were placed on a large construction paper timeline.

"After the timeline was completed, " Banaszynski continued, "the students were arranged in groups, and each group did a critical analysis of primary-source material, focusing on the efforts each side made to avoid the war. This started students thinking about what the issues were and how each side handled them."

The next step was to ask a question: Did the colonists have legitimate reasons for going to war against Great Britain? Banaszynski asked each group to choose either the Patriot or Loyalist position and spend a day searching the Internet for primary sources and other materials to support their positions.

Although the students spent time at a number of different sites, Banaszynski reported that they found AmDocs: Documents for the Study of American History and The British Monarchy particularly valuable. Students also usedEBSCO, an informational database, and such primary documents as the Magna Carta, the English Bill of Rights, the Declaration of Independence, and John Locke's Two Treatises of Government. When students completed the online research, the groups met to record their findings and discuss the important points.

Students then wrote individual essays, working both in and out of class. Using the research gathered by the groups and the information shared in their group discussions, each student completed a one-to-two page typed essay supporting his or her point of view.

When they finished their essays, students re-formed the groups, analyzed and evaluated one another's work, and created group essays setting forth the most persuasive arguments from the individual essays. Peer evaluations helped each group member to see how other students interpreted his or her research.

Students were then provided with a handout on HTML, and one member of each group typed the group's essay into the school Web site. Each student then edited the essay for mechanical errors and content.

Finally, students wrote broadsides (newspaper pages) on the events of the war. "They also completed short individual quizzes throughout the project. I used a rubric to grade the individual and group persuasive essays, " Banaszynski noted.

HOW HIGH CAN IT GO?

"In previous years, Banaszynski said, "the activities involved in this project were presented separately. In this project, using scaffolding, students started with a basic understanding of a few events and used it to create a timeline. The timelines helped them develop a better understanding of the events. They used that knowledge base to create individual persuasive essays. The group essays built on the individual essays. Writing the group essays helped them write the broadsides. In that way, each activity built upon the previous activity, and each became increasingly more difficult - just as the higher levels of a scaffold are harder to put together than those at ground level."

Although they spent three days on essay preparation, Banaszynski reported that the students continued to work cooperatively on completing their text-based study of the Revolutionary War during the entire project. Because they completed text work that would normally have taken five days in only three days, the entire project required only one extra day to complete.