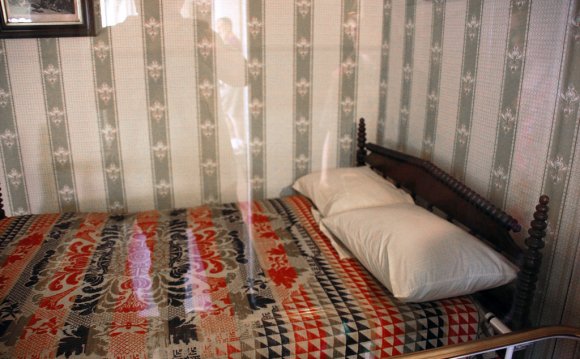 Abraham “Abe” Lincoln was born on February 19, 1809, in Hardin County, Kentucky, to Thomas and Nancy Lincoln in a one-room log cabin. Nancy Lincoln passed away when Abraham was nine years old, and his father remarried Sarah Bush Johnston, who encouraged his education and maintained a cordial relationship between Abe and his father.

On April 3, 1865, Abraham Lincoln entered Richmond, Virginia, the Confederate capital. Only hours before, President Jefferson Davis had fled. As Lincoln walked through the streets escorted by ten sailors, crowds of African Americans shouted "Glory to God! Glory! Glory! Glory! Glory, Hallelujah. The Great Messiah!"A few miles away, the great commander of the Confederate Army of Virginia, General Robert E. Lee, his army reduced to 35, 000 weary men, confronted Grant's 120, 000 bluecoats. Faced with the inevitable, Lee, making the most difficult decision of his life, sent word to Grant that he would meet him in a farm house at the village of Appomattox Courthouse to surrender his army and thereby end the war. The surrender occurred on April 9. As a sign of Union respect for Confederate valor, the defeated officers of Lee's army were allowed to retain their swords.

Five days later, as the victorious Lincoln watched Laura Keene's light comedy Our American Cousin at Ford's Theater in Washington, D.C., a darkly clad figure burst through the door of Lincoln's box in the balcony and shot the President point-blank in the back of his head. Mary Todd Lincoln screamed and tried to shield Lincoln with her body. The assassin, John Wilkes Booth, leaped from the box to the stage to make his escape, shouting "Sic semper Tyrannis! [Thus always to Tyrants] The South is avenged!" Ten days later, after a near hysterical search by the army and the secret service, Booth was discovered hiding in a barn in rural Virginia. In the attempt to capture him, the barn was set on fire and Booth either shot himself or was killed in the shoot-out.