Native Americans during the Revolutionary War 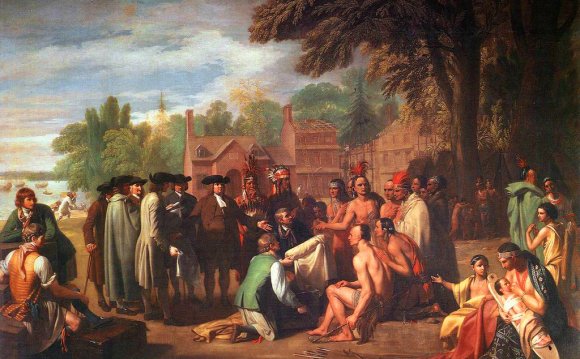 Deeming it a matter of importance to prevent the junction of Burgoyne and St. Leger, General Schuyler sent Arnold, with a considerable force to relieve Fort Schuyler. Arnold made use of stratagem to affect this. He captured an American of wealth and influence, whom he believed had been acting the part of a traitor, and promised his life and fortune on condition that he would go to Fort Schuyler and alarm the Indians and British by magnifying the force which was marching against them. This was done; and the Indians, who had already become discontented on account of their losses in the battle with Herkimer, and the disappointment of their hopes of plunder, left St. Leger to prosecute the siege with the British troops alone. But he concluded to raise the siege, and retreated with his whole force two days before Arnold arrived. The firm and successful defense of Fort Schuyler, added to the victory at Bennington, contributed greatly to inspirit the Americans, and may be considered as the commencement of that which ended in glory at Saratoga.

The horrid cruelties of the Indians in the service of the British roused the indignation of the Americans to a fearful height. One barbarous act, although it was a case of individual suffering, made a deep impression on the Americans, and was alluded to in a letter from General Gates to General Burgoyne, dated 2d of September. It deserves particular mention, because of the excitement it created at the time it was first made known.

Mr. Jones, an officer of the British army, had engaged the affections of Miss Macrea, a young lady of amiable character and spotless reputation, daughter of a gentleman attached to the royal cause, living near Fort Edward; and they had agreed to be married. In the course of his duties, the officer was removed to some distance from his bride, and became anxious for her safety. He engaged two Indians of different tribes, to bring her to camp, and promised a keg of rum to the person who should deliver her safe to him. She dressed to meet her intended husband, and accompanied her Indian conductors. By the way, the two Indians quarreled in regard to who should deliver her to her lover; and to settle the matter according to Indian usage, one of them cleft her skull with a tomahawk. This simple, but affecting story was exaggerated and dwelt upon by the American newspapers in a style that fired the people with hatred and a determined spirit that would not be satisfied with anything short of an extermination of the Indians wherever found, and which aided materially in securing the triumph of the American arms.

The next exploit of Brandt and the Indian Butler, was at Wyoming, a new and flourishing settlement on the eastern branch of the Susquehanna. The territory, in which the town was situated, was claimed by two states Pennsylvania and Connecticut. From the collision of contradictory claims, the laws of neither state were enforced, and the security of the inhabitants was destroyed. The Tories were numerous, and were under less control than in the larger towns. But twenty-seven of them were taken and sent to Hartford for trial; these were afterwards set at liberty. Burning with desire of revenge for loss of property and banishment, these Tories and their friends joined the Indians, and prepared to attack the settlement. A little before the main attack, some small parties made sudden irruptions, and committed several robberies and murders; and from ignorance, or a contempt of all ties whatever, massacred the wife and five children of one of the persons sent for trial to Connecticut in their own cause.

At length, in the beginning of July, the enemy suddenly appeared in full force on the Susquehanna, headed by Colonel John Butler, a Connecticut Tory, and cousin to Colonel Zebulon Butler, the second in command in the settlement. He was assisted by most of those leaders, who had rendered themselves terrible in the present frontier war. Their force was about sixteen hundred men, near a fourth Indians, led by their own chiefs: the others were so disguised and painted as not to be distinguished from the Indians, excepting their officers, who, being dressed in regimentals, carried the appearance of regulars. One of the smaller forts, garrisoned chiefly by Tories, was given up or rather betrayed. Another was taken by storm, and all but the women and children massacred in the most inhuman manner.

(July 3.) Colonel Zebulon Butler, leaving a small number to guard Fort Wilkesbarre, crossed the river with about four hundred men, and marched into Kingston Fort, whither the women, children, and defenseless of all sorts crowded for protection. He suffered himself to be enticed by his cousin to abandon the fortress. He agreed to march out, and hold a conference with the enemy in the open field (at so great a distance from the fort, as to shut out all possibility of protection from it) upon their withdrawing according to their own proposal, in order to the holding of a parley for the conclusion of a treaty. He at the same time marched out about four hundred men well armed, being nearly the whole strength of the garrison, to guard his person to the place of parley, such was his distrust of the enemy’s designs. On his arrival, he found no body to treat with him, and yet advanced toward the foot of the mountain, where at a distance he saw a flag, the holders of which, seemingly afraid of treachery on his side, retired as he advanced; whilst he, endeavoring to remove this pretended ill impression, pursued the flag, till his party was thoroughly enclosed, when he was suddenly freed from his delusion by finding it attacked at once on every side. He and his men, notwithstanding the surprise and danger, fought with resolution and bravery, and kept up so continual and heavy a fire for three quarters of an hour, that they concluded a gain a marked superiority. In this critical moment, a soldier, through a sudden impulse of fear, or premeditated treachery cried out aloud, “the colonel has ordered a retreat!” The fate of the party was now at once determined. In the state of confusion that ensued, an unresisting slaughter commenced, while the enemy broke in on all sides without obstruction. Colonel Zebulon Butler, and about seventy of his men escaped; the latter got across the river to Fort Wilkesbarre, the colonel made his way to Fort Kingston, which was invested the next day, (July 4, ) on the land side. The enemy, to sadden the drooping spirits of the weak remaining garrison, sent in for their contemplation the bloody scalps of one hundred and ninety-six of their late friends and comrades. They kept up a continual fire upon the fort the whole day. In the evening, the colonel quit the fort and went down the river with his family. He is thought to be the only officer that escaped.

(July 5.) Colonel Nathan Dennison, who succeeded to the command, seeing the impossibility of an effectual defense, went with a flag to Colonel John Butler, to know what terms he would grant on surrender; to which application Butler answered with more than Indian phlegm in two short words the hatchet. Dennison having defended the fort, till most of the garrison were killed or disabled, was compelled to surrender at discretion. Some of the unhappy persons in the fort were carried away alive; but the barbarous conquerors, to save the trouble of murder in detail, shut up the rest promiscuously in the houses and barracks, which having set on fire, they enjoyed the Indian pleasure of beholding the whole consumed in one general blaze.