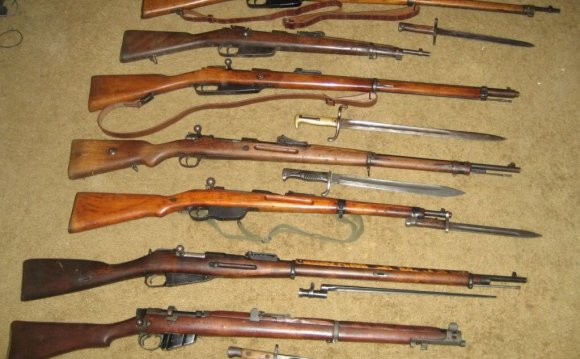 The infantryman in World War One was equipped with standard issue weapons at the start of the war but by the end of World War One, most infantrymen had become adept at using other weapons that had been developed as the war had progressed.

The Lee Enfield was first produced in 1907; it had been designed by an American called James Lee and built at the Royal Small Arms Factory in Enfield – hence the rifle’s name. The Lee Enfield enjoyed a good reputation with those who were issued with it. It had a ten-bullet magazine and its rate of fire in the hands of well-trained men was high. At the Battle of Mons, the advancing Germans believed that they were under fire from British machine guns. In fact, it was the well drilled infantry of the BEF using their standard issue Lee Enfield. A good infantryman would expect to shoot off about twelve well-aimed bullets in a minute.

If the Lee Enfield had one weakness, it was that the firing mechanisms were susceptible to dirt and grit. Therefore, keeping your rifle clean in the muddy environment of the trenches was of paramount importance. When not in battle, many men simply covered the firing mechanism with cloth in an effort to keep out dirt which would clog up the rifle. The butt of the Lee Enfield had a space inside it where cleaning material could be kept.

The French infantryman was issued with either the Lebel or the Berthier rifle. The Lebel was first produced in 1886 so by 1914, it should have been a tried and tested weapon. However, by 1914, nothing had been done to correct a basic design fault of the Lebel. Anyone loading the Lebel had to be very careful how they did this as there was a chance of the bullets exploding in the magazine as they were loaded nose to tail. One bullet could hit the primer of the bullet next to it. Therefore, the loading procedure was slow and as the magazine only took eight bullets, the rate of fire of the Lebel was not high.

In 1916, in recognition of the problems presented by the Lebel, the French introduced the Berthier rifle. Unlike the Lebel, the Berthier was a clip-loaded rifle with a more modern firing mechanism. However, its magazine could only take six rounds, so the Bertheir’s overall rate of fire was not high as reloading the magazine was a constant issue in combat.

German infantry were issued with the Mauser rifle. This rifle was designed in 1898 by Peter Paul Mauser. It was popular with those who were issued with it because of its reliability but it did suffer one weakness – its magazine only took five bullets. So, like the Berthier, reloading was a constant problem in battle.

No infantryman was issued with a pistol as this was very much the preserve of the officer. The British army officer primarily preferred the Webley Mark IV. This pistol was also issued to personnel in tanks and armoured cars – carrying a rifle would have been useless in such vehicles. The Webley packed a deadly punch and was reliable and easy to clean – hence its popularity with British officers. Over 300, 000 were distributed to British personnel throughout the duration of the war. In 1908, the German Army adopted the Luger as a pistol. Like the Webley, it was reliable and such was its popularity that it became the world’s most used pistol. About 1.5 million Lugers were produced by Germany from 1914 to 1918.

World War One Machine Gun Instruction For The Artists Rifles