Interesting facts about the moon landing 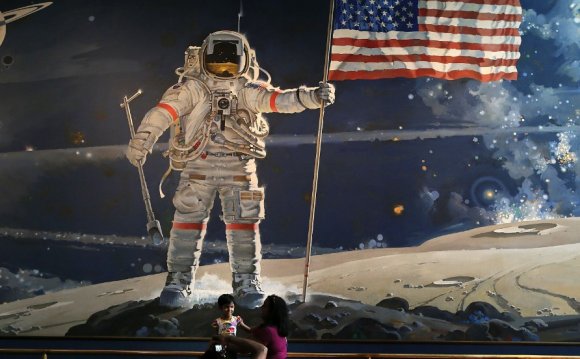 On the 20th July 1969 NASA (National Aeronautics and Space Administration) claimed to have landed the first men on the Moon (Neil Armstrong and Buzz Aldrin) with their Apollo 11 mission. NASA claimed to have made another five manned Moon landings ( Apollo Missions 12, 14, 15, 16 and 17) with Apollo 17 being the final mission landing on 7th December 1972. NASA still claims a total of 12 American astronauts walked on the Moon. All the alleged Moon landings used the Saturn V rocket system. The total cost of the Apollo missions is estimated at £203 billion in 2013 US dollars.

NASA gives the distance from the centre of Earth to the centre of the Moon as 239, 000 miles. Since the Earth has a radius of about 4, 000 miles and the Moon’s radius is roughly 1, 000 miles, that leaves a surface-to-surface distance of 234, 000 miles. The total distance traveled during the alleged missions, including Earth and Moon orbits, ranged from 622, 268 miles for Apollo 13 to 1, 484, 934 miles for Apollo 17. It is accepted by the majority of People that the Apollo Moon landings were genuine, however the Cuban School National Curriculum and a growing number of sceptics claim the Apollo missions were faked. Even though this blog in no way alleges that Nazi war criminals faked the Moon landings we did find these 20 amazing facts:

Wernher Magnus Maximilian, Freiherr von Braun (March 23, 1912 – June 16, 1977) was a German rocket engineer and space architect. He was one of the leading figures in the development of rocket technology in Germany during World War II and, subsequently, in the United States. He is credited as being the “Father of Rocket Science”. In his 20s and early 30s, von Braun was the central figure in the Nazis’ rocket development program, responsible for the design and realization of the V-1 and V-2 combat rockets during World War II.

Werner von Braun’s SS number was 185, 068 and his Nazi Party membership number was 5, 738, 692, he ended the war as a SS Major. After the war, he and some select members of his rocket team were taken to the United States as part of the then-secret Operation Paperclip.

Operation Paperclip involved the USA taking a large number of German scientists, technicians and other staff to the USA after the war. The USA also appropriated about 300, 000 German scientific patents.

In 1929 a German filmmaker called Fritz Lang released a silent film called Die Frau im Mond (The Woman in the Moon). The film’s technical adviser on the film was Herman Oberth, considered to be one of the three founding fathers of rocketry. Assisting Oberth on the film project was one of his brightest students, teenager Wernher von Braun.

A decade-and-a-half later, both Oberth and von Braun would be scooped up through Operation Paperclip and brought to America to work on the Apollo Missions, whose choreography just happened to very closely match that of the fake Moon launch Oberth and von Braun had crafted forty years earlier.

Maybe it’s just a coincidence that a 1929 silent German film had the same rocket technology as 1960s/70s American Moon landings.

Both the film (Die Frau im Mond) and the Apollo Missions also both had the famous countdowns and the cheering, patriotic crowds.

The 1929 silent film Die Frau im Mond had a storyline that was a cross between Apollo Mission 11 (first alleged man on the Moon) and Apollo Mission 13 (aborted Moon landing after an oxygen tank allegedly exploded).

The 1929 silent film Die Frau im Mond and the 1960s/1970s Apollo Missions both had the same team of technical advisers.

3. America Versus Russia In The Space Race:

After World War Two America and Russia entered in to an arms race and a space race. Until the Apollo Moon landings Russia had beaten the Americans in every “first” in the space race:

August 6, 1961 – Gherman Titov, aboard the Soviet Vostok 2, becomes the first man to spend over a day in space and the first to sleep in Earth orbit.

August 11 & 12, 1962 – The Soviet Vostok 3 and Vostok 4 are launched, the first simultaneous manned space flights (though they do not rendezvous).

October 30, 1967 – The Soviet Cosmos 186 and Cosmos 188 become the first unmanned spacecraft to rendezvous and dock in Earth orbit. The United States will not duplicate this maneuver for nearly four decades.

January 16, 1969 – The Soviet Soyuz 4 and Soyuz 5 become the first manned spacecraft to dock in Earth orbit and the first to exchange crews.

On April 14, 1961, two days after Gagarin’s historic flight, a panicked President Kennedy reportedly inquired of NASA what goal in space America might be able to attain before the Soviets. According to legend, President Kennedy was told that America’s best hope to beat the Russians was with a manned Moon landing. At Rice University on September 12th, 1962 President Kennedy made the following speech setting the goal of the Moon landings by the end of the 1960s:

4. NASA Has Lost All Data, Blueprints And Records From The Apollo Missions:

Following Freedom Of Information requests in America NASA admitted it had lost all their original video footage of the Apollo Missions. Unfortunately, it isn’t just the video footage that is missing. Also allegedly beamed back from the Moon was voice data, biomedical monitoring data, and telemetry data to monitor the location and mechanical functioning of the spaceship. All of that data, the entire alleged record of the Moon landings, was on the 13, 000+ reels that are said to be ‘missing.’ Also missing, according to NASA and its various subcontractors, are the original plans/blueprints for the lunar modules. And for the spacesuits and lunar rovers. And for the entire multi-sectioned Saturn V rockets.

6 Interesting Facts about the Moon