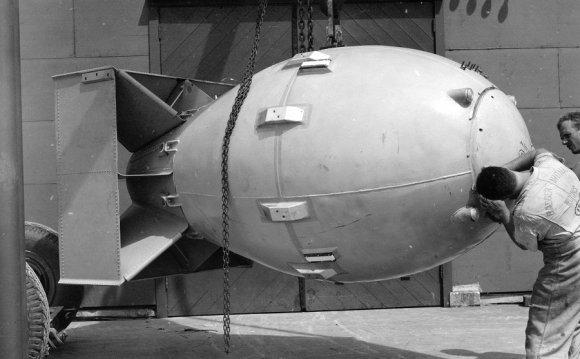 On Thirring’s diagram, a “Phantasie” of “Details der Bombenkonstruktion” (you have to love the German here) based on the description in the Smyth Report, you can see that there is a projectile (P) which gets shot down an artillery barrel (R) by conventional explosives into the target (), which is a larger amount of fissile material embedded in a tamper (). The role of the tamper (which is discussed in the Smyth Report) is to reflect neutrons and hold together the fissioning mass a few milliseconds longer than it might otherwise be inclined. This allows for more fission reactions and more of an explosion.

So this is more or less how we’ve been talking about gun-type designs since 1945… until very recently. John Coster-Mullen, a trucker/photographer/bomb geek (and a friend of mine), dubbed “Atomic John, ” by the New Yorker in 2008, found, through some painstaking research, that this old story was wrong on one important detail.

Now half of you are saying “so what, ” the other half are saying “I already know this, I’m an atomic wonk, ” and the two of you who are not in that category (and are left out of the halves by rounding errors) are saying, “Cooooool.”

There are some technical reasons why this arrangement is a better one, though I’m not the “technical boy” (to use a William Gibson phrase) who will expound on them, given my utter lack of claim to real technical authority. As an historian, what I find most compelling is the fact that I once I knew the above, I kept finding little bits and pieces to corroborate it sprinkled throughout the archive.

My favorite example: in 1964, William L. Laurence gave a long interview to the Columbia University Oral History Project, which is now available on microfilm at several major libraries. Laurence is a fascinating character who I’m sure to come back to in the future on here — he was a major pioneer in American science journalism, worked for The New York Times in the 1940s, and was the only member of the news media allowed to view the Manhattan Project. In this role he wrote basically all of the initial stories on the bomb that appeared after its use, which were distributed to all other newspapers in the country (and world) for reprinting. He got to ride along for the Nagasaki bombing, and won a Pulitzer for all of this atomic reporting. He’s controversial and fascinating, but that’s for another post.