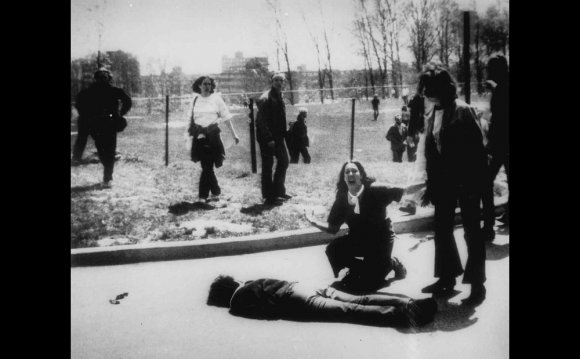 Richard Nixon announced on April 30th, 1970 that American military forces would expand the Vietnam War into Cambodia. The Vietnam War by this point had already been controversial and this expansion angered many of the youth in America. On May 1st a demonstration was held on Kent State University that consisted of about 500 students. This rally dispersed rather quickly when students left to attend their classes. The students decided that they would continue to rally against the expansion into Cambodia on May 4th. The students gathered on Monday May 4th to protest the war despite the schools efforts to ban the gathering. An estimated 2, 000 students gather on the university’s commons to protest the war. The rally began when the Victory bell was sounded. The Ohio Army National Guard was called in fairly quick to disperse the large crowd that had gathered. However more national guardsmen were called in after the crowd began to throw rocks and other materials at the soldiers. The guardsmen then began to fire tear gas in hopes of dispersing the crowd but due to the wind this had little effect. Then quite suddenly the guardsmen began to fire their weapons upon the students unloading a total of 67 rounds during a period of 13 seconds. In total four students were killed and nine others were wounded. United States citizens were outraged after this incident; in response over 4 million students of universities and high schools participated in a student strike.

The Kent State Massacre and the Vietnam War