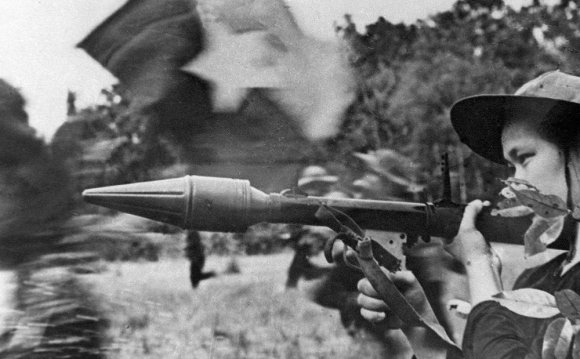 The Vietnam War did not confine itself to one nation; its impact on neighbouring Laos and Cambodia was also profound. Two of Vietnam’s western neighbours were also affected by and ultimately drawn into the conflict, with devastating consequences. Like Vietnam, Laos and Cambodia were both divided by competing Cold War loyalties; each had indigenous communist movements and pro-Western right-wing factions. These divisions ultimately pulled Laos and Cambodia into civil war. Both countries were subject to incursions from North Vietnamese, Viet Cong and US troops and aircraft. Laos and Cambodia were bombed extensively by US planes, a highly controversial act of aggression against two third-world states. In Cambodia, the civil war culminated with the reign of Pol Pot and the Khmer Rouge – and one of the most deadly genocides in human history.

Both Laos and Cambodia had many similarities with Vietnam. Most of their native populations were Buddhist peasants, who lived poor but peaceful lives as farmers. Both were French colonies from the late 1800s, though colonial rule there was not as oppressive and socially disruptive as in Vietnam. Both were occupied by the Japanese in World War II, their local kings permitted to remain as puppet rulers. Laos gained full independence from France in 1953, when it was promised French and US military and financial support. By this stage Laos also had its own communist insurgency, called Pathet Lao, made up mostly of Laotians who had fought with the Viet Minh. By the late 1950s, a large area of eastern Laos was controlled by the Pathet Lao, along with North Vietnamese who had crossed the border to lend support.

To the south, Cambodia was led by Norodom Sihanouk, a charismatic young prince with a taste for Western culture, particularly Elvis Presley. Sihanouk was not short on ego: he produced his own films, organised public processions and parades (usually with himself at the centre) and gave long, rambling speeches on Cambodian radio. But Sihanouk was also a progressive and a fervent nationalist, who loved his country and wanted the best for its people. When the French granted Cambodia independence, also in 1953, Sihanouk took the radical step of abdicating as king and re-entering politics as a democratic candidate. He was immediately elected prime minister. Sihanouk was initially pro-American, but as US military action in Vietnam escalated in 1965, he adopted a more neutralist position. This was a difficult proposition, since Cambodia shared land borders with Vietnam and Sihanouk’s government was unable to secure these borders. Viet Cong troops and Cambodian communists moved freely across the border and controlled the heavily forested areas in Cambodia’s north, which they used for stashing supplies, taking refuge and transiting men and materiel to South Vietnam. Cambodian farmers also continued to sell rice to the Viet Cong – for trade rather than political support.