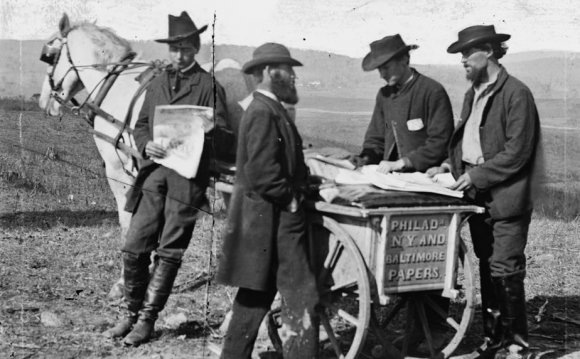 As word spread on April 14, 1865 that President Abraham Lincoln had been shot while attending a performance there with his wife at Ford's Theatre, newspapers scrambled to provide the latest details to their readers.

The initial shooting, followed by his death, played out on the front pages of the national press the following morning. The papers continued to issue new editions — a relatively new method enabled by printing press technology — as the hunt for his assassin John Wilkes Booth played out.

The New York Herald, the nation's most widely read newspaper at the time, was one of the first outlets to report that Lincoln had been shot. Over 18 hours, the paper published an unprecedented seven editions providing updates on the president's condition. Today, the Newseum is displaying all of those editions, including a recently discovered 8:45 a.m. “extra” that was one of the first newspapers to report the president’s death.

"Lincoln's assassination was the biggest breaking news story of its time, ” said Cathy Trost, senior vice president of exhibits and programs at the Newseum. “From the first bulletin about the shooting to the dramatic manhunt for the assassin, these historic front pages make you feel as if you were there, witnessing the crime of the century.”

The Associated Press was also on scene to report on the shooting. Here's an excerpt from the original report:

The theatre was densely crowded, and everybody seemed delighted with the scene before them. During the third act and while there was a temporary pause for one of the actors to enter, a sharp report of a pistol was heard, which merely attracted attention, but suggested nothing serious until a man rushed to the front of the President's box, waving a long dagger in his right hand, exclaiming, 'Sic semper tyrannis, ' and immediately leaped from the box, which was in the second tier, to the stage beneath, and ran across to the opposite side, made his escape amid the bewilderment of the audience from the rear of the theatre, and mounted a horse and fled.

The groans of Mrs. Lincoln first disclosed the fact that the President had been shot, when all present rose to their feet rushing towards the stage, many exclaiming, 'Hang him, hang him!' The excitement was of the wildest possible description...

There was a rush towards the President's box, when cries were heard — 'Stand back and give him air!' 'Has anyone stimulants?' On a hasty examination it was found that the President had been shot through the head above and back of the temporal bone, and that some of his brain was oozing out. He was removed to a private house opposite the theatre, and the Surgeon General of the Army and other surgeons were sent for to attend to his condition.

The New York Times archive shared its April 15 edition, which led with the headline: "Awful Event: President Lincoln is Shot by an Assassin."

The Baltimore Sun ran the headline "A Great National Calamity. Assassination of President Lincoln!" in their April 15, 1865 edition. Additional clips from the front page can be seen here.

Two days later, the Boston Daily Advertiser published an issue supplement on April 17, 1865, which included several dispatches from around the country providing "full and trustworthy accounts" of the shooting, Lincoln's death, and the swearing-in of Andrew Johnson.

Civil War, The Vatican, And The Assassination Of Abraham ...