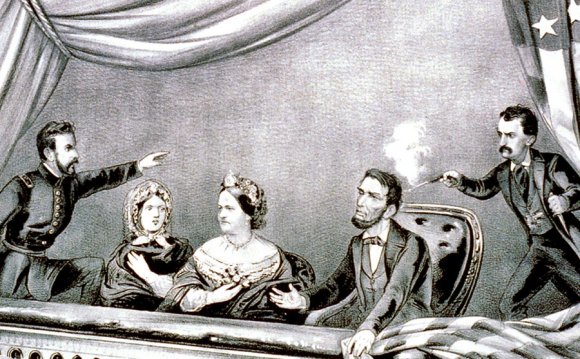 In August 1864, the Sixteenth President of the United States of America was nearly assassinated about nine months before he was actually assassinated. This is the story.

Throughout the Civil War (1861-1865), President Abraham Lincoln and his family spent the summer and fall in a cottage on the grounds of the Soldiers’ Home in the country outside of Washington, D.C. Relatively isolated and poorly guarded, Lincoln was dismissive of any danger to himself or his family. He is reputed to have said: “It would never do for a President to have guards with drawn sabers at his door, as if he fancied he were . . . an emperor.”

Many in his administration were concerned about the lack of security, and on occasion took matters into their own hands, as reported by a friend:

The President and his family have been living out at the Soldiers’ Home, about four miles only this side of the rebel line of skirmishers; but on Sunday night Secretary Stanton sent out a carriage and a guard and brought in the family, who are again domesticated at the White House. The lonely situation of the President’s summer residence would have afforded a tempting chance for a daring squad of rebel cavalry to run some risks for the chance of carrying off the President, whom we could ill afford to spare right now.

Of course, Lincoln did have a contingent of guards, a part of Company K of the 150th Pennsylvania Volunteers.

Remaining assigned to the President from 1862 until his death in 1865, the President’s Bodyguard developed a friendly relationship with him. Nonetheless, he disliked it when they accompanied him during his commute to the White House; in his typical wry style, Lincoln complained to the Army Chief of Staff Henry Halleck that he “was more afraid of being shot by the accidental discharge of one of [the new recruits’] carbines or revolvers, than of any attempt on his life.”

Even with the assigned guard, Lincoln frequently slipped away and commuted back and forth to the cottage alone; on many occasions, he even enjoyed a lonely moonlight ride to an evening destination like the Naval Observatory in Foggy Bottom.

It was during a lonely ride back to the Soldiers’ Home one night in August when an attempt was made on the President’s life. Riding slowly on the road that led to the entrance to the grounds, a rifle shot from approximately fifty yards away startled his horse; Old Abe, the horse, took off at what the President called “break-neck speed [which] unceremoniously separated me from my eight-dollar plug hat, with which I parted company without any assent, express or implied.”

When he arrived at the Soldiers’ Home at about 11 o’clock that evening, he met Private John W. Nichols, whom he knew. Nichols noticed that the President was “bareheaded” and riding briskly. When he asked, the President mentioned the rifle shot and that the quick jump of his startled horse “jerked his hat off.”

Later, Nichols and another soldier went searching and found the hat with a bullet hole in it. Nichols presented the hat to Lincoln who was dismissive of the danger. When his friend Ward Hill Lamon (to whom he told the story as a humorous, Ichabod Crane-type tale) expressed concern, Lincoln remained convinced that it was just an accident:

Now, in the face of this testimony in favor of your theory of danger to me, personally, I can’t bring myself to believe that any one has shot or will deliberately shoot at me with the purpose of killing me; although I must acknowledge that I heard this fellow’s bullet whistle at an uncomfortably short distance from these headquarters of mine. I have about concluded that the shot was the result of accident. It may be that some one on his return from a day’s hunt, regardless of the course of his discharge, fired off his gun as a precautionary measure of safety to his family after reaching his house.

In the end, Lincoln wanted the entire matter hushed up. He instructed Private Nichols that the event should be “kept quiet, ” and told Lamon:

The whole thing seems farcical. No good can result at this time from giving it publicity. It does seem to me that I am in more danger from the augmentation of an imaginary peril than from a judicious silence, be the danger ever so great.

Lincoln continued to serve as President of the United States, apparently without another such incident, until his assassination on April 14, 1865.

Assassination of Abraham Lincoln in the movie The Birth of ...

The Assassination Of Abraham Lincoln By The Jesuits Of Rome