Who was Abraham Lincoln shot by? 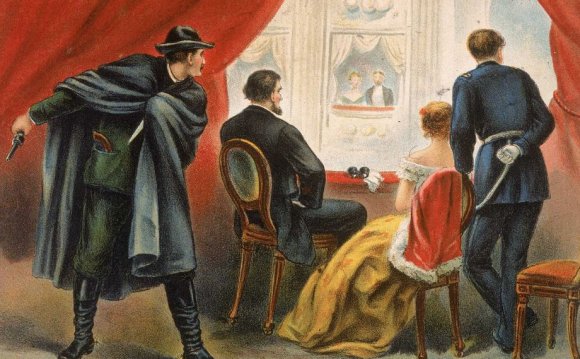 Before you bemoan the current state of media, why don’t we apply modern-day best practices to a historic event and see how well journalists of yesteryear fared? Just check out how the news media covered one of the most infamous moments in American history: President Abraham Lincoln’s assassination on April 14, 1865.

The way we deliver catastrophic news now is to get to the newsy part as quickly as possible. A sitting American president is fatally shot in the head? Doesn’t get more newsy than that.

WASHINGTON, APRIL 14 — President Lincoln and wife visited Ford’s Theatre this evening for the purpose of witnessing the performance of ‘The American Cousin.’ It was announced in the papers that Gen. Grant would also be present, but that gentleman took the late train of cars for New Jersey.

The theatre was densely crowded, and everybody seemed delighted with the scene before them. During the third act and while there was a temporary pause for one of the actors to enter, a sharp report of a pistol was heard, which merely attracted attention, but suggested nothing serious until a man rushed to the front of the President’s box, waving a long dagger in his right hand, exclaiming, ‘Sic semper tyrannis, ’ and immediately leaped from the box, which was in the second tier, to the stage beneath, and ran across to the opposite side, made his escape amid the bewilderment of the audience from the rear of the theatre, and mounted a horse and fled.

The groans of Mrs. Lincoln first disclosed the fact that the President had been shot, when all present rose to their feet rushing towards the stage, many exclaiming, ‘Hang him, hang him!’ The excitement was of the wildest possible description.

There was a rush towards the President’s box, when cries were heard — ‘Stand back and give him air!’ ‘Has anyone stimulants?’ On a hasty examination it was found that the President had been shot through the head above and back of the temporal bone, and that some of his brain was oozing out. He was removed to a private house opposite the theatre, and the Surgeon General of the Army and other surgeons were sent for to attend to his condition.

That right there could be the most buried lede ever published.

Readers learned that “The American Cousin” was a crowd-pleaser and Grant took a late train before they were informed that “the President had been shot.”

But what about his condition? Keep going until just before the end of the story, where you’ll learn:

The President was in a state of syncope, totally insensible and breathing slowly. The blood oozed from the wound at the back of his head. The surgeons exhausted every effort of medical skill, but all hope was gone.

The parting of his family with the dying President is too sad for description.

Lest we get too judgmental here, AP reporter Lawrence Gobright raced from the White House to Ford’s Theatre to put this report together, and “he was handed the assassin’s gun and turned it over to authorities, ” AP editors noted.

Points to Gobright for being a patriot.


A copy of a 1865 lithographic print by Currier & Ives shows John Wilkes Booth shooting Lincoln as he sits in the presidential box at Ford’s Theatre. (Gibson &Co./Library of Congress via Reuters)

The news judgement of Washington’s Evening Star may have been somewhat better, but the newspaper’s front-page treatment wasn’t especially great.