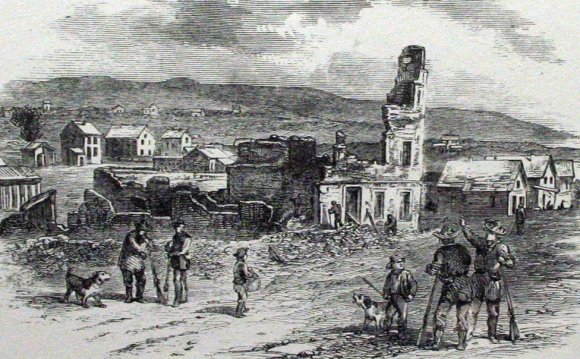 The Civil War was the culmination of a series of confrontations concerning the institution of slavery.

This 1856 map shows the line (outlined in red) established by the Missouri Compromise. (Library of Congress)

In the growth years following the 1803 Louisiana Purchase, Congress was compelled to establish a policy to guide the expansion of slavery into the new western territory. Missouri’s application for statehood as a slave state sparked a bitter national debate. In addition to the deeper moral issue posed by the growth of slavery, the addition of pro-slavery Missouri legislators would give the pro-slavery faction a Congressional majority.

Ultimately, Congress reached a series of agreements that became known as the Missouri Compromise. Missouri was admitted as a slave state and Maine was admitted as a free state, preserving the Congressional balance. A line was also drawn through the unincorporated western territories along the 36⁰30 parallel, dividing north and south as free and slave.

Thomas Jefferson, upon hearing of this deal,

“considered it at once as the knell of the Union. It is hushed indeed for the moment. But this is a reprieve only, not a final sentence. A geographical line, coinciding with a marked principle, moral and political, once conceived and held up to the angry passions of men, will never be obliterated; and every new irritation will mark it deeper and deeper.”

In August of 1831, a slave named Nat Turner incited an uprising that spread through several plantations in southern Virginia. Turner and approximately seventy cohorts killed around sixty white people. The deployment of militia infantry and artillery suppressed the rebellion after two days of terror.

Fifty-five slaves, including Turner, were tried and executed for their role in the insurrection. Nearly two hundred more were lynched by frenzied mobs. Although small-scale slave uprisings were fairly common in the American South, Nat Turner’s rebellion was the bloodiest.

Virginia lawmakers reacted to the crisis by rolling back what few civil rights slaves and free black people possessed at the time. Education was prohibited and the right to assemble was severely limited.

The Wilmot Proviso was a piece of legislation proposed by David Wilmot (D-FS-R PA) at the close of the Mexican-American War. If passed, the Proviso would have outlawed slavery in territory acquired by the United States as a result of the war, which included most of the Southwest and extended all the way to California.

Wilmot spent two years fighting for his plan. He offered it as a rider on existing bills, introduced it to Congress on its own, and even tried to attach it to the Treaty of Guadalupe Hidalgo. All attempts failed. Nevertheless, the intensity of the debate surrounding the Proviso prompted the first serious discussions of secession.

With national relations soured by the debate over the Wilmot Proviso, senators Henry Clay and Stephen Douglas managed to broker a shaky accord with the Compromise of 1850. The compromise prevented further territorial expansion of slavery while strengthening the Fugitive Slave Act, a law which compelled Northerners to seize and return escaped slaves to the South.

While the agreement succeeded in postponing outright hostilities between the North and South, it did little to address, and in some ways even reinforced, the structural disparity that divided the United States. The new Fugitive Slave Act, by forcing non-slaveholders to participate in the institution, also led to increased polarization among centrist citizens.

Harriet Beecher Stowe’s fictional exploration of slave life was a cultural sensation. Northerners felt as if their eyes had been opened to the horrors of slavery, while Southerners protested that Stowe’s work was slanderous.

Uncle Tom’s Cabin was the second-best-selling book in America in the 19th century, second only to the Bible. Its popularity brought the issue of slavery to life for those few who remained unmoved after decades of legislative conflict and widened the division between North and South.

The Kansas-Nebraska Act of 1854, narrowly passed while Congressmen brandished weapons and uttered death threats in the House chambers, overturned parts of the Missouri Compromise by allowing the settlers in the two territories to determine whether or not to permit slavery by a popular vote.

Events That Changed The World 6/20: The American Civil War