Weapons of the American Civil War 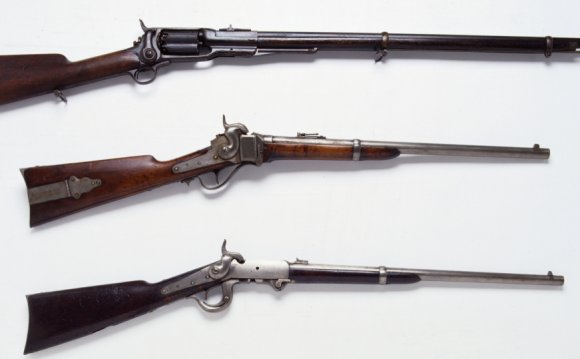 In 1861, the belligerents were about to enter the modern era of weaponized warfare on land, sea and air. The changes altered age old tactics and severely reduced the rate of survival. On land, accuracy and increased range of small and large guns emerged. On the sea, iron ships made wooden navies obsolete. In the air, telegraphy brought the front lines to the commanders in the rear. Spotters in balloons hovering over enemy lines, provided their cannon batteries with eye witness intelligence required to properly calibrate range for the big guns. Between 1861 and 1865, two hundred years of tactics and weapons were on the cusp of disappearing, and new techniques and technologies would eliminate the old before the turn of the century.

Inventors were encouraged to file patents with fresh ideas that would increase the lethality of weapons. President Abraham Lincoln personally demanded that filing patents be processed rapidly in the hope that some innovation would provide a "magic bullet" to end the war. Some in his cabinet, and many generals in the field, were opposed to any change. They argued that a new idea was too costly, and would require retraining troops. Reportedly, Lincoln expended personal funds to purchase some breech loading weapons. Despite the president's lack of military expertise to counteract the "old soldiers" resistance to change, the tide occasioned by scientific discovery and civilian industrialization washed onto the battlefields.

In order to supply two very active armies, both the Union forces and the Confederates had organizational problems.

Each had to supply a war machine with the most basic need, primarily it was production of ordnance. Secondarily, but of equal significance, where ever possible, standardization of weapons was sought. This meant producing ammunition with calibers that were universal for similar weapons supplied to the armies.

It is at this point, that difficulties for the south were more pronounced.

The North had an extensive manufacturing system that included cannon foundries, federally funded armories and arsenals as well experimental laboratories. The South, essentially an agrarian society, had to build new weapons and munitions facilities, rely on the few that already existed, convert cotton mills to the war effort, depend upon buying agents in Mexico and Europe, and protect the existing resources from constant attack by Union forces.

In 1862, turn around was fair play, as Confederate forces under Stonewall Jackson stormed, Virginia (now West Virginia) and captured the Union's arsenal netting 13, 000 small arms and 73 cannons. A welcomed addition to the arsenal of the rebel forces.

In 1861, Confederate arsenals held a total of 160, 000 small arms to support an army that would grow from 750, 000 to 1, 000, 000 men. The Union fielded forces of army, navy and marines that were at least twice the size of the enemy's comparable units. It is estimated that black Americans responding to the call to arms in the north comprised about 175, 000. The ex slave, Frederick Douglass, called upon his brothers to fight for their freedom with these words:

"The rebellion can be put down without your help. Slavery can be abolished by white men, but liberty so won for the black man, while it may leave him an object of pity, can never make him an object of respect".

Both the north and south raced to augment the supply of arms. The Confederate government wisely sought the expertise of Pennsylvania born, West Point trained, Josiah Gorgas, who fortuitously was married to an Alabama lady. His patriotism resided where his heart found a home. He rapidly turned a Macon Georgia laboratory into the most successful rebel supply depot. Gorgas obtained the services of a British chemist, James H. Burton, newly arrived from England with manufacturing experience and plans for the production of the .58 caliber Enfield rifle. This was the most commonly used musket by north and south. Although still muzzle loaded, it had a rifled bore which increased range and dramatically improved accuracy, and could be effective up to 2, 000 yards.These improvements ultimately discouraged infantry assaults over large, open fields leading to fire fights from behind defensive redoubts (temporary fortifications). The weapon was first introduced to British infantry in their 1853 Crimean war. It still required that the powder (propellant) and bullet (ball) be rammed down from the muzzle end. It had an adjustable rear sight and a fixed end sight and bayonet mounting.

The technology had improved radically since the universal use of the smooth bore musket in the Revolutionary War.

The Minie ball, named for its French inventor, was now bullet shaped (cylindrical) and capable of piercing four inches of solid wood and could drop a man on contact as well as any one standing behind him. The lead bullet produced a large, horrendous wound, and when it struck an arm or leg often only treated by amputation.

The rifled base matched the rifle bore and controlled the ball's spin when fired. Its effective explosive power was excellent up to 400 yards; some 300 yards greater than its predecessor.

The Springfield rifle was American manufactured and along with the Enfield long gun was commonly used by the infantry of north and south. Here is where standardization paid off. The Minie ball was compatible to both rifles. The Enfield had finer settings for range, but the Springfield with its 40 inch length was a bargain at $20.00. At the beginning of the war, the smooth bore musket was quickly being replaced with rifled bore weapons. Springfield produced two models (1855 and 1861) with minor differences. Production in the Massachusetts armory was augmented by private manufacturers. Mass production in the north produced over 2 1/2 million Springfield rifles.

By the time Josiah Gorgas was promoted to brigadier general in 1864, he created a Nitre Mining Bureau that produced the gun powder for the southern armies, and promoted the utilization of such raw materials as copper and iron used in weapons production. Gorgas then supplied the raw materials to numerous southern mills. He was able to improve the rifle's domestic production significantly to about 350, 000 guns, although imports amounted to over 700, 000 units. History has overlooked his contribution to the rebel cause.