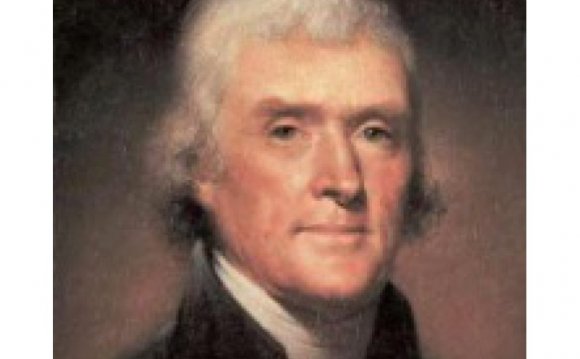 Thomas Jefferson is celebrating the big 2-7-2 today, and we have 10 interesting facts about the versatile Founding Father.

Jefferson is best known for his role in writing the Declaration of Independence, his foreign service, his two terms as president, and his omnipresent face on the modern nickel.

The well-rounded Jefferson was also a Renaissance man who was intellectually curious about many things.

Here are 10 interesting facts about Jefferson’s pursuit of knowledge:

1. Thomas Jefferson really, really liked books. The third president, after his retirement, sold his library of 6, 500 volumes to the Library of Congress after it was ransacked by the British. Jefferson needed the cash to pay off debts, but he started buying more books. “I cannot live without books, ” he told John Adams.

2. Jefferson the economist. Jefferson was deeply engaged in economic theory, which he learned to love during his time in France. He was a friend and translator to leading European theorists; he believed in the free market policies; and he opposed bank notes as currency.

4. Jefferson the food lover. On his return from France, Jefferson brought his love of that nation’s cuisine back with him. James Hemings went to France as his slave, and the pair agreed that if Hemings learned how to make French cuisine, he would be freed on his return to America.

5. Jefferson the wine snob. Yes, Jefferson brought his love of French wine back to America, too. He had two vineyards at Monticello, which he apparently used to experiment with. Acknowledged as a great wine expert of early America, he sought to promote wine as an alternative to whiskey and cider.

6. Jefferson the agriculturalist. He believed in the United States as an agrarian society, in part, because it would make the nation independent from other nations. Jefferson practiced what he taught: He was one of the first American farmers to employ crop rotation and redesigned the plow to make it more efficient.

7. Jefferson the paleontologist. He was also obsessed with fossils and was involved in a great debate about the mammoth that became a political cause. Jefferson raised the profile of paleontology as president, and he has a mammoth named after him.

8. Jefferson the astronomer. Jefferson loved stargazing almost as much as he liked books. He made sure astronomy was taught at the University of Virginia, and he designed what may have been the first observatory in the United States.

9. Jefferson the writer. He was a prolific writer during his lifetime, with his authorship of the Declaration of Independence and the Virginia Statute for Religious Freedom included in his epitaph (instead of his two terms as president). The Thomas Jefferson Papers at the Library of Congress includes about 27, 000 documents, including his extensive correspondence with key historical figures.

10. Jefferson the musician. He took violin lessons as a child and played the violin as he courted his future wife, Martha Skelton. Jefferson spent considerable time studying the violin as an instrument, but by 1778 he complained about music being played in the New World as being in a “state of deplorable barbarism.”