Quotes about the American Civil War 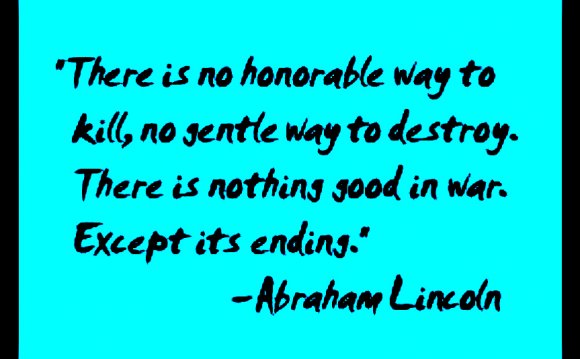 "It is well that war is so terrible, or we would grow too fond of it."

"War is cruelty. There is no use trying to reform it. The crueler it is, the sooner it will be over."

"Nearly all men can stand adversity, but if you want to test a man's character, give him power."

"Let us cross over the river and rest under the shade of the trees."

"I hate newspapermen. They come into camp and pick up their camp rumors and print them as facts. I regard them as spies, which, in truth, they are. If I killed them all there would be news from Hell before breakfast."

"General Lee, this is no place for you. These men behind you are Georgians and Virginians. They have never failed you and will not fail you here. Will you boys? "

"My plans are perfect, and when I start to carry them out, may God have mercy on Bobby Lee, for I shall have none."

"I have just read your dispatch about sore-tongued and fatigued horses, Will you pardon me for asking what the horses of your army have done since the Battle of Antietam that fatigues anything? "

"A Union that can only be maintained by swords and bayonets, and in which strife and civil war are to take the place of brotherly love and kindness, has no charm for me."

"The past is dead; let it bury its dead, its hopes and its aspirations; before you lies the future-a future full of golden promise."

"Let me say no danger and no hardship ever makes me wish to get back to that college life again."

"We talked the matter over and could have settled the war in thirty minutes had it been left to us."

- Unknown Confederate Soldier referencing a meeting he had with a Union soldier between the lines.

"The Army of Northern Virginia was never defeated. It merely wore itself out whipping the enemy."

"If I owned Texas and Hell, I'd rent out Texas and live in Hell."

"If it is a crime to love the South, its cause and its President, then I am a criminal. I would rather lie down in this prison and die than leave it owing allegiance to a government such as yours."

"I appeal to you as a soldier to spare me the humiliation of seeing my regiment march to meet the enemy and I not share its dangers."

"I know Mr. [Jefferson] Davis thinks he can do a great many things other men would hesitate to attempt. For instance, he tried to do what God failed to do. He tried to make a soldier of Braxton Bragg."

"The art of war is simple enough. Find out where your enemy is. Get at him as soon as you can. Strike him as hard as you can, and keep moving on."