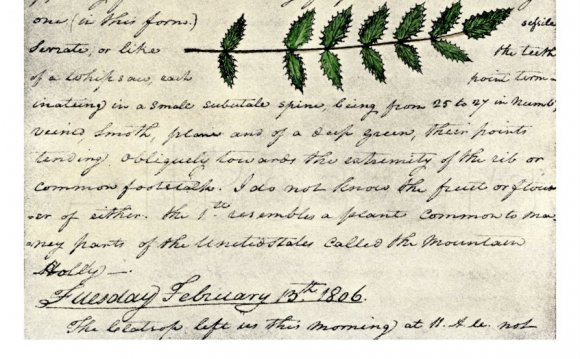 The following text does not include the sextant readings. There were usually two parts to each journal entry by Lewis or Clark. One is a narrative text describing the day's events: the other gives the course of travel and distance covered for the day, which the captains usually called "courses, distances, and references."

it is 230 yds. wide at its mouth & wider above from the point up the Missourie for about 3 ms. N. 21° W, Down the Middle of the Missourie is S. 32° E, up the upper bank of the Kansais, is S. 54° E the river turns to the East above a pt. of high land, well Situated for a fort & in view of the Missouris one mile up & on the upper Side, the width of the Missouris at this place is about 500 yds.

The wood land on each side of the Mouth of this river is extensive and of a good quallity as far as our hunters was back, but badly watered with Springs, only two being Seen by them

Some punishment of two men Hall & Collins for takeing whiskey out of the Barrel last night [Ed: see Detachment Order of June 29] agreeable to the Sentences of a Court Mtl of the party who we have always found verry ready to punish Such Crimes-

Many Deer Killed to day

Allarm post or order of Battle arms to be Situated & the Duty &c.

Messes of men under a Serjiant who is to detail for every day one man of his Squad to Cook &c. who Shall have the management of the provisions dureing that day or issue, each Days rations must be divided &c. &c

30th June, Set out verry early this Morng Saw a verry large wolf [blank] on the Sand bar this morning walking near a gange of Turkeys (1) at 10 miles above the Kansis passed the mouth of a Small River Call the (Petite Plate) or the little Shole river, this river is about 70 yds. Wide and has Several rapids & falls, well Calculatd for mills, the land on this river is Said to be Roaling, Killed 2 Deer Bucks Swinging [swimming] the river the wind from the S. W. here we opened the Bag of Bread given us by [blank] which we found verry good, our Bacon which was given us by [blank] we examined and found Sound and good Some of that purchased in the Illinois Spoiled, [I found] a relish of this old bacon this morning was verry agreeable, Deer to be Seen in every direction and their tracks ar as plenty as Hogs about a farm, our hunts.

Killed 9 Deer to day the land below the last river is good, that above, between the two rivers which is near together is Slaik'y and bad on the N. Side, the other Side is good land, Landed on the L. S. below an Isd called Dimond Island

On the Larboard Shore ¾ of a mile below the Little river Platte.-

Observed time and distance of 's and 's nearest limbs; the East with Sext. & Chrontr.

Set out verry early this morning, a verry large wolf Came to the bank and looked at us this morning, passd the (1) mouth of a Small river 10 ms. above the Kanseis Called by the french Petite River Platte (or Shoal river) from the number of falls in it, this river is about 60 yards wide at its mouth and runs Parrilel with the Missouries for ten or twelve miles, [I am] [NB: (Some of the party who went up] told that the lands on this Small river is good, and on its Several falls well Calculated for mills, the wind from S. W. came to at 12 oClock & rested three hours, the [sun or day?] being hot the men becom verry feeble, Farnsts. Thermometer at 3 oClock Stood at 96° above 0, emence numbs. of Deer on the banks, Skipping in every derection, the party Killed nine Bucks on the river & Bank to day, The Countrey on the S. S. between the Shoal River & Missouris is indifferent Subject to overflow, that below and on the L. S. is high & appers well timbered, Camped on the L. S. opsd. the Lower point of a Isd. Called diamond Island, Broke our mast

Read The Food Journal of Lewis & Clark: Recipes for an ...