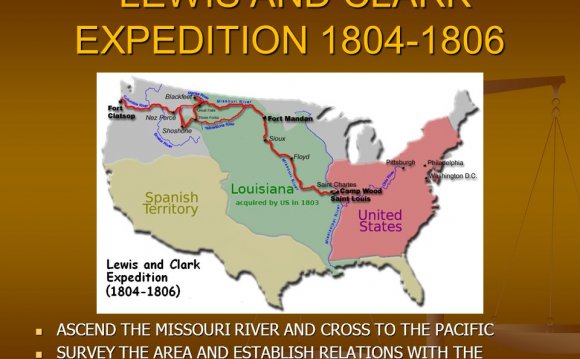 The Lewis and Clark expedition lasted from 1804 to 1806. With congressional funds of $2, 500, the group set out from the mouth of the Missouri River to the mouth of the Columbia River. They were sent by President Thomas Jefferson, who wanted to extend American influence all the way to the west coast so as to compete with the British for the fur trade. The round trip would take them over 8, 000 miles by boat, canoe, and horseback. Only one man died on the trip and two deserted. Lewis and Clark kept journals during their adventures and later published over one million words about the flora, fauna, geography, weather, and peoples of the West.
Meriwether Lewis and William Clark were both soldiers. Lewis was the president's personal secretary. Clark was recruited as Lieutenant though Lewis later promoted him to Captain. Both selected their volunteers carefully. They wanted men that were strong and healthy, that could withstand unbearable conditions, that were good hunters, that were used to the woods, and were unmarried. Some were former soldiers, some were interpreters, and some were sailors. Clark also took along his slave York. Lewis brought his Newfoundland dog Seaman. Lewis and Clark called their expedition the Corps of Discovery.

On May 14, 1804, forty-five men set out up the Missouri River. The main boat was a 55-foot long keel boat. They also brought two canoe-type boats called pirogues. They sailed for five months before stopping for the winter at Fort Mandan in present day North Dakota. There they hired Toussaint Charbonneau, a French fur trader and interpreter. As an added bonus, they got his Shoshone Indian wife Sacajawea. Her presence assured...

The Real Lewis and Clark