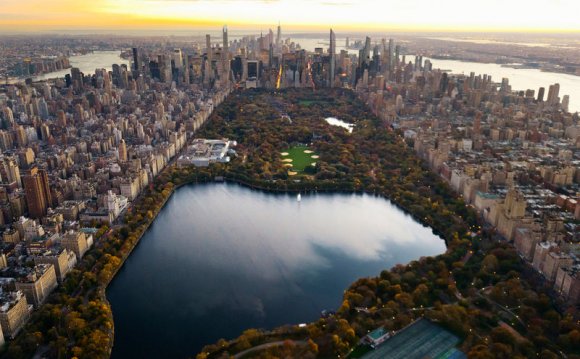 While most of the supertall building boom spotlight has been placed China and the UAE over the past few months, there's an even more staggering development happening much, much closer to home. At least four 1, 000-foot-plus skyscrapers are set to rise along (or adjacent to) West 57th Street over the next few years, each of the tall enough to change the city's skyline forever.

The Wall Street Journal declares it “a new era for skyscrapers, ” while The Observer’s Matt Chaban wonders “just how many skinny luxury towers can we jam onto 57th Street?”

But what’s most remarkable about this boom? Its geography. At least six major building projects are being proposed along one street—West 57th—over the next few years. Three of those (along with one on West 56th Street) will compete for the title of the city's tallest building, based on habitable height (rather than spire height, for which One World Trade takes the cake), and one will be the tallest residential tower in the Western Hemisphere.

Along this short strip of city, a construction race is being kindled by investors eager to nab a slice of the most valuable real estate in America—and it's driving some fairly insane pieces of architecture, too.

The most modest of these projects is One57, a 1, 004-foot-tall condo building that’s currently nearing completion (seen below). This was the project that, arguably, led to the clustering of new projects along the same street. Why? Because it made news for the speed at which its luxury condos sold—at a time when property values were wavering, no less—and set a record for the highest price paid for a residence in New York city: million.

Then there’s 432 Park, a 1, 398-foot-tall condo building designed by infamous “death-ray architect” Rafael Vinoly. Located a block south of West 57th on the former site of the 80-year-old Drake Hotel, which was demolished to make room for the tower, it's currently climbing quickly with a projected completion date of mid-2014. Each of the building’s windows measures 100 square feet of glass, and amenities will include such necessities as a "golf training facility." It’ll soon eclipse One57 as the tallest residential building in the Western Hemisphere:

In late August, Nordstrom shelled out more than 0 million to anchor the forthcoming 1, 550-foot-tall condo tower at 225 West 57th Street, which will be designed by the architects of the now-legendary Burj Khalifa, Adrian Smith + Gordon Gill Architecture (who were part of SOM at the time). The plan is still pending approval from the city, so we only have a vague idea of what it will look like. But if it's given the green light, it will eclipse Chicago's Willis Tower as the tallest residential building in the US.