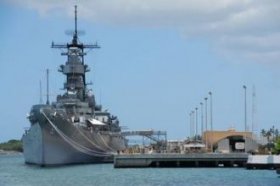 Pearl Harbor Naval Base, Hawaii, was attacked by Japanese torpedo and bomber planes on December 7, 1941, at 7:55 a.m. Hawaii time. The sneak attack sparked outrage in the American populace, news media, government and the world. On December 8, President Franklin D. Roosevelt addressed the American Congress, and the nation, to detail the attack. He began:

Yesterday, December 7th, 1941 - a date which will live in infamy - the United States of America was suddenly and deliberately attacked by naval and air forces of the Empire of Japan.

The United States was at peace with that nation and, at the solicitation of Japan, was still in conversation with its government and its emperor looking toward the maintenance of peace in the Pacific.

Indeed, one hour after Japanese air squadrons had commenced bombing in the American island of Oahu, the Japanese ambassador to the United States and his colleague delivered to our Secretary of State a formal reply to a recent American message. And while this reply stated that it seemed useless to continue the existing diplomatic negotiations, it contained no threat or hint of war or of armed attack.

In that address, the president asked Congress to pass a declaration of war. Congress obliged, voted and passed the U.S. Declaration of War on Japan, on the same day. That was America`s formal entry into World War II.

The Pearl Harbor surprise attack has been depicted in many different films over the last 60 years - >Michael Bay directed Pearl Harbor in 2001, Fred Zinnermann`s From Here to Eternity was released in 1953, and the popular Tora! Tora! Tora! was made in 1970. And while these films display how destructive and devastating the attack was, they aren`t able to include as much of the historical context because they only have 1-3 hours in which to tell the story.

The attack took place on a sunny Sunday morning. A minimal contingent of soldiers was on duty at the time. Most offices on the base were closed and many servicemen were on leave for the weekend. New technology, including the new radar mounted on Opana Point, were in place, manned and functioning at the time of the attack. The incoming Japanese attack planes were detected by the radar and reported, but were mistaken for an incoming group of American planes due from the mainland that morning. While on practice maneuvers outside the harbor that morning, an American destroyer spotted a Japanese submarine attempting to sneak into the harbor. The submarine was fired upon, immediately reported — and ignored.

Pearl Harbor is located on the south coast of Oahu Island. At the time, the naval base was about 22, 000 acres in size. The American fleet was under the command of Admiral Husband E. Kimmel and the ground troops were commanded by Lt. General Walter C. Short. Pearl Harbor was the hub of American naval power since King Kalakua gave the right to the U.S. to develop a coal station there in 1887. The harbor had recently been designated as the American Pacific Fleet`s new home base because of concern over Japan`s increasing aggressiveness. Most of America`s military commands of the Pacific Region had headquarters on the base, yet the United States continued its isolationism.

While there were veiled warnings and isolated events of Japanese hostilities in the weeks, days and hours ahead of the attack, no one in command at Pearl Harbor or in Washington, D.C., expected a Japanese attack on Pearl Harbor, especially before war was formally declared. Effective cryptography and successful cryptanalysis were in their infancy at the time. Under-funded, under-manned and under-equipped, cryptanalysts had been ordered to concentrate on Japanese diplomatic traffic, rather than naval messages. The nation would have had a much clearer picture of the Japanese military buildup and, with the warning provided by those messages, might have prevented the disaster of Pearl Harbor.

Indeed, on the morning of December 7, the Japanese ambassador in Washington, D.C., had been ordered by his government to destroy all official documents and deliver a 14-page document to Secretary of State Cordell Hull at a specific time that day. After laborious manual decoding and translation, the document was delivered later than the Japanese government had intended. The news of the attack on Pearl Harbor had already reached the White House before the Japanese ambassador arrived at the White House. The world was stunned by the news.