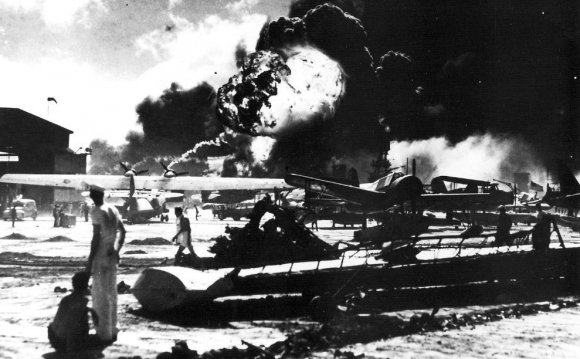 Under a early morning South Pacific sun, softball teams were lining up on the beach. Pitchers warmed up their arms, while batting rosters were finalized and the wives and kids came over from seaside church services.

They did not know that for hours the Japanese naval fleet and air forces had been speeding across the ocean toward America's Pacific base. There, like a string of pearls draped across the docks and waterfront, was the majority of America's naval might.

The devastating Japanese onslaught began at 7:48 a.m., eventually killing 2, 402 Americans and wounding many others, sinking four battleships and damaging many more.

The Pearl Harbor attack spurred America into World War II, leading ultimately to Allied victory over the Japanese in the East and Nazis and other Axis powers in the West. And the country promised never to forget this day of infamy.

Here are photographs from the attack and its immediate aftermath:

On the morning of Dec. 7, 1941, an attack planned by Admiral Isoroku Yamamotoa was carried out to demobilize the US Navy. This picture shows one of more than 180 planes used in the attack.

At 7:00 a.m., an Army radar alert operator spotted the first wave of the Japanese attack force. The officers to whom those reports were relayed did not consider them significant enough to take action. This photo shows an aerial view of Battleship Row in the opening moments of the raid.

The Japanese aircrews were able to hit most of the American ships on Oahu shortly before 8:00 a.m. Here a Japanese plane flies over Pearl Harbor while black smoke rises from the area.

There were more than 90 ships anchored in the area that morning. The primary targets were the 8 battleships sitting at Battleship Row in Pearl Harbor. Here is a picture of Battleship Row during the attack.

USS West Virginia (left) pictured here next to USS Tennessee, was one of the first battleships to sink during the attack. The Japanese successfully damaged all 8 battleships.

There was a short lull in the attack at about 8:30 a.m. The damaged USS Nevada tried to escape down the channel toward the open sea but became a target during a second wave of 170 Japanese planes, hoping to sink her in the channel and block the narrow entrance to Pearl Harbor. The ship was grounded with 60 killed on board.

Aerial view of the naval base, harbor installations and ...

Aerial view of Honolulu and Pearl Harbor during RIMPAC 2012