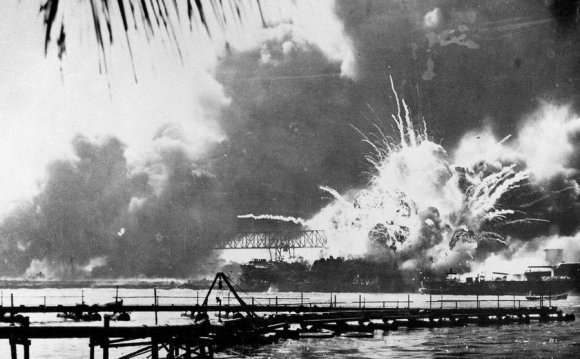 The Japanese attack on Pearl Harbor in the Hawaiian Islands on December 7, 1941 marked the official entrance of the US into WWII.

The first sign of the Japanese fleet racing towards Pearl Harbor came at 7:00 am the morning of December 7, when two US Army privates on the Hawaiian island of Oahu were just about to turn off a mobile radar station they had manned since 4:00 am. A slight disturbance on the screen gave pause to their actions - a large yet indistinct patch of light, which appeared to the men to come from 50 planes, seemed to be heading towards the island. Confused, one of the privates called the information center across the island, reaching an army lieutenant who assured them the light was simply a fleet of American B-17s. The lieutenant had heard Hawaiian music playing on the radio station earlier that morning, a signal that typically signified an approaching American aircraft to Hawaii, and determined that the blotch on the radar’s oscilloscope screen must be the incoming fleet.

Careful Japanese precautions and comprehensive planning allowed the attack on Pearl Harbor to remain completely shielded from US intelligence. For nearly two weeks prior to the attack, Japanese battleships and destroyers had escorted 43 fighters, 51 dive-bombers, 49 high-level bombers, and 40 torpedo planes from six carriers that floated 200 miles north of Pearl Harbor. The aircraft had traveled in complete radio silence in order to catch the Americans by surprise.

Upon reaching Pearl Harbor, the torpedo bombers skillfully maneuvered themselves into the harbor in groups of twos and threes in a sudden and forceful attack lasting only minutes. In another hour, a second fleet of 167 additional Japanese aircraft bombarded the site.

American residents who watched the attack from afar observed in horror as the screams of men on the sunken battleships rippled through the air, smoke rose from the sea, and the injured and dead swam in bloody waters slick with burning oil. When the effects of the attack subsided, the grim casualties became known: 2, 403 American civilians and military personnel had been killed, and 1, 178 wounded. Two battleships and 188 aircraft were destroyed.

The US Enters the War

Although the attack caught American military personnel by surprise, the US was quick to mobilize itself for all-out war. The morning after Pearl Harbor, Congress granted President Franklin D. Roosevelt a declaration of war on Japan. Three days later, Germany and Italy declared war on the United States. The War Department completely reorganized itself, as key positions shifted to various trusted officers in order to prepare for the new conflict.

Although prior to Pearl Harbor the US had sent large amounts of financial aid and military equipment to the Allied cause, the Japanese attack launched the US into a complete struggle against Axis powers and brought American soldiers into the war for the first time.

President Truman's statement notifying the American public of the dropping of the atomic bomb on Hiroshima on August 6, 1945 included the following words: "The Japanese began the war from the air at Pearl Harbor. They have been repaid many fold."