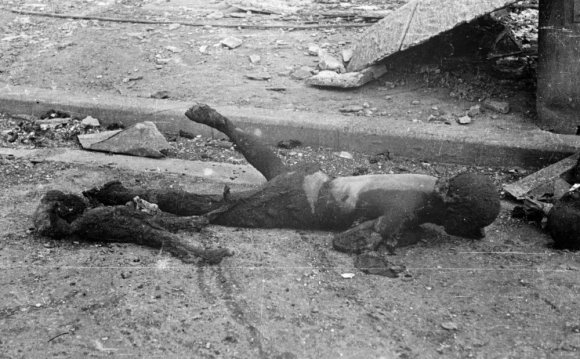 Once the shock of the Japanese attack on Pearl Harbor subsided, the focus of American military planners turned to retaliation - even if it was only symbolic. A few weeks after the attack, Lt. Colonel James H. Doolittle presented his superiors with a daring and unorthodox plan. B-25 bombers, normally land-based, would be transported by an aircraft carrier to within striking-distance of the Japanese mainland and launched to attack a number of cities.

A top-secret training program began immediately. The major problem was to learn how to force the bomber, which normally required a minimum of 1200 feet of runway for takeoff, to get airborne using the 450 feet of a carrier deck. After weeks of training, the volunteer crews flew to San Francisco where they boarded the USS Hornet and joined a small flotilla of ships headed for Japan.

The attack was launched on the morning of April 18, 1942, 150 miles further from Japan than planned out of fear that the task force had been spotted by the Japanese. Doolittle gunned the lead plane and lumbered successfully off the carrier's flight deck. Fifteen planes followed, each one skimming just above the waves and carrying a payload of four bombs. Thirteen bombers targeted Tokyo; the others struck Nagoya, Osaka and Kobe. Flying low, the planes were cheered by civilians who thought they were Japanese.

After dropping their bomb-loads on their assigned targets, the attackers flew on until they ran out of fuel. Fifteen of the crews landed in Japanese-occupied China and made it to friendly territory with the aid of Chinese peasants. One crew landed in the Soviet Union and was immediately interned. Eight airmen were captured by the Japanese, four of whom were later executed.

Although the raid was materially but a pin prick, its psychological impact was monumental. It elevated the flagging American moral and destroyed the Japanese conviction that they were invulnerable to air attack. The humiliated Japanese command hastily planned an attack on the American outpost at Midway - an attack whose failure would become the turning point of the war in the Pacific.

Lt. Ted Lawson piloted one of the attacking bombers. We join his story as he watches the strike leader, Colonel James H. Doolittle, gun the engines of his B-25 and attempt to take off from the carrier deck:

"A Navy man stood at the bow of the ship, and off to the left, with a checkered flag in his hand. He gave Doolittle, who was at the controls, the signal to begin racing his engines again. He did it by swinging the flag in a circle and making it go faster and faster. Doolittle gave his engines more and more throttle until I was afraid that he'd burn them up. A wave crashed heavily at the bow and sprayed the deck.

Then I saw that the man with the flag was waiting, timing the dipping of the ship so that Doolittle's plane would get the benefit of a rising deck for its take-off. Then the man gave a new signal. Navy boys pulled the blocks from under Doolittle's wheels. Another signal and Doolittle released his brakes and the bomber moved forward.

With full flaps, engines at full throttle and his left wing far out over the port side of the Hornet, Doolittle's plane waddled and then lunged slowly into the teeth of the gale that swept down the deck. His left wheel stuck on the white line as if it were a track. His right wing, which had barely cleared the wall of the island as he taxied and was guided up to the starting line, extended nearly to the edge of the starboard side.

We watched him like hawks, wondering what the wind would do to him, and whether we could get off in that little run toward the bow. If he couldn't, we couldn't.

Doolittle picked up more speed and held to his line, and, just as the Hornet lifted itself up on the top of a wave and cut through it at full speed, Doolittle's plane took off. He had yards to spare. He hung his ship almost straight up on its props, until we could see the whole top of his B-25. Then he leveled off and I watched him come around in a tight circle and shoot low over our heads-straight down the line painted on the deck."

We rejoin Lawson's story as he pilot's his plane towards its bomb target in Tokyo:

"I was almost on the first of our objectives before I saw it. I gave the engines full throttle as Davenport [co-pilot] adjusted the prop pitch to get a better grip on the air. We climbed as quickly as possible to 1, 500 feet, in the manner which we had practiced for a month and had discussed for three additional weeks.

There was just time to get up there, level off, attend to the routine of opening the bomb bay, make a short run and let fly with the first bomb. The red light blinked on my instrument board, and I knew the first 500-pounder had gone.

Our speed was picking up. The red light blinked again, and I knew Clever [bombardier] had let the second bomb go. Just as the light blinked, a black cloud appeared about 100 yards or so in front of us and rushed past at great speed. Two more appeared ahead of us, on about the line of our wingtips, and they too swept past. They had our altitude perfectly, but they were leading us too much.

The third red light flickered, and, since we were now over a flimsy area in the southern part of the city, the fourth light blinked. That was the incendiary, which I knew would separate as soon as it hit the wind and that dozens of small fire bombs would molt from it.

The moment the fourth red light showed I put the nose of the Ruptured Duck into a deep dive. I had changed the course somewhat for the short run leading up to the dropping of the incendiary. Now, as I dived, I looked back and out I got a quick, indelible vision of one of our 500-pounders as it hit our steel-smelter target. The plant seemed to puff out its walls and then subside and dissolve in a black-and-red cloud. . .

Our actual bombing operation, from the time the first one went until the dive, consumed not more than thirty seconds."

About 6 1/2 hours later, Lawson's plane is low on fuel as the crew spots the Chinese mainland and Lawson attempts to land on a beach in a driving rain:

"So I spoke into the inter-phone and told the boys we were going down. I told them to take off their chutes, but didn't have time to take off mine, and to be sure their life jackets were on, as mine was. I put the flaps down and also the landing wheels, and I remember thinking momentarily that if this was Japanese occupied land we could make a pretty good fight of it while we lasted. Our front machine gun was detachable.

In the next split second my hands punched forward and with one motion I hit both throttles, trying to force life back into the engines, and both prop pitch controls. And I tried to pull back the stick to keep the nose up, so we could squash in. We were about a quarter of a mile off shore when we hit.

The two main landing wheels caught the top of a wave as the plane sagged. And the curse of desperation and disappointment that I instinctively uttered was drowned out by the most terrifying noise I ever heard.

It was as if some great hand had reached down through the storm, seized the plane and crunched it in a closing fist.

Then nothing. Nothing but peace. A strange, strange, peaceful feeling. There wasn't any pain. A great, restful quiet surrounded me.

Then I must have swallowed some water, or perhaps the initial shock was wearing off, for I realized vaguely but inescapably that I was sitting in my pilot's seat on the sand, under water.
Source: www.eyewitnesstohistory.com