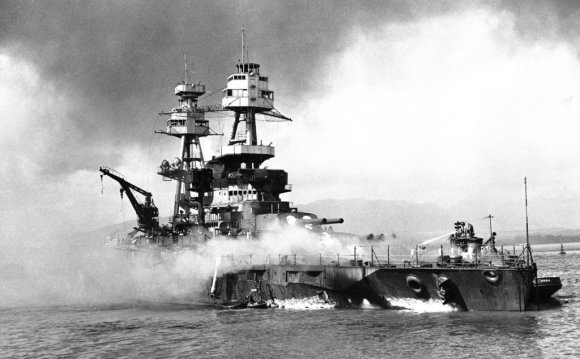 Ford Island was the epicenter of the attack on December 7, 1941. Its seaplane base had dozens of long-range PBY patrol bombers capable of locating the Japanese fleet after the attack. Along her coast were moored seven of the Pearl Harbor fleet’s nine battleships. Ford Island is also where the Pacific Fleet’s three carriers would have moored had they been in port that day. The attack destroyed nearly all of the patrol planes. It also disabled the Pacific Fleet’s battleship force, making it impossible for the U.S. to carry the fight to Japan to spoil the Japanese expansion in the Pacific.

Today, Ford Island is still an active military base. However, it is now possible for tourists to visit parts of this historic battlefield. Pacific Aviation Museum Pearl Harbor gives visitors access to historic Hangar 37 and Hangar 79 and is in the process of renovating the famous control tower. The museum will eventually expand to include Hangar 54. This is the first in a series of articles on Ford Island as it existed on December 7, 1941.

Figure 1 shows Pearl Harbor and the surrounding area. Ford Island is in the middle of the harbor.

On the eastern shore is the Navy Yard, where heavy repairs were done. The USS Pennsylvania (BB-28), the flagship of the battle fleet was in dry dock for overhaul. In the second wave of the attack, dive bombers damaged the Pennsylvania heavily damaged the destroyers USS Cassin (DD-372), USS Shaw (DD-373), and USS Downes (DD-375). On the 1010 Dock closest to Ford Island, the light cruiser USS Helena (CL-50) and the minelayer USS Oglala (CM-4) were moored during the attack. Both were sunk by a Japanese torpedo but were later restored. The Helena was lost at the Battle of Kula Gulf in 1943.

Many Japanese torpedo planes flew along the East Loch to get the longest possible straight runs for dropping their torpedoes. This put the battleships USS Oklahoma and USS West Virginia in an almost direct line. Of the 40 torpedoes dropped by Japanese aircraft, approximately 14 hit these two ships.

Note that Hickam Field, which was the U.S. Army Air Forces bomber field in Hawaii, is adjacent to Pearl Harbor. Today, the two bases are combined into Joint Base Pearl Harbor Hickam.

The figure also shows the narrow sea channel between the Pacific Ocean and Pearl Harbor. If a major ship had been sunk in the harbor while escaping, other ships could not leave or enter the harbor.

Finally, the figure shows oil storage near the submarine base. Admiral Nagano has been criticized for not launching a third wave to destroy the oil storage tanks throughout Pearl Harbor and ship repair facilities in the Navy Yard.

Figure 2 takes a closer look at Ford Island. This picture was taken on October 10, 1941. If it looks familiar to visitors to Pacific Aviation Museum, this is because the photograph was the basis for the Dru Blair mural that visitors see when they enter the main floor of Hangar 37.

The label Battleship Row lies at the bottom of a set of quays used by the bulk of Pearl Harbor’s battleships. On the day of the attack, the battleships Oklahoma (BB-37), Maryland (BB-46), West Virginia (BB-48), Tennessee (BB-43), Arizona (BB-39), and Nevada (BB-36) were moored there. The USS California (BB-44) was moored farther down at Quay F-3, just behind where the USS Enterprise is in the October, 1941 picture (at Quay F-2) [1]. These battleships bore the brunt of the torpedo, high-level bombing, and dive bombing attacks on Pearl Harbor that day. The USS Pennsylvania (BB-38), the other battleship in port that day, was in the Navy Yard undergoing overhaul. The other battleship in the Pearl Harbor force was the USS Colorado (BB-45). She was in undergoing overhaul on the West Coast.

No aircraft carriers were in port that day. The USS Enterprise (CV-6) was scheduled to have returned from dropping off 12 F4F fighters at Wake Island, but it was delayed by heavy seas. As noted in an earlier blog article, the Enterprise was normally moored where it was in Figure 2. The USS Lexington (CV-2) and the USS Saratoga (CV-3) normally moored on the other side of the island, where the USS Utah (AG-16) was moored on the day of the attack. On the day of the attack, Lexington was on its way to delivery dive bombers to Midway Island. Saratoga had just finished a refit and was entering San Diego’s harbor to pick up its air wing. The survival of these carriers was critical for the first year of the war.