What was the effect of Pearl Harbor? 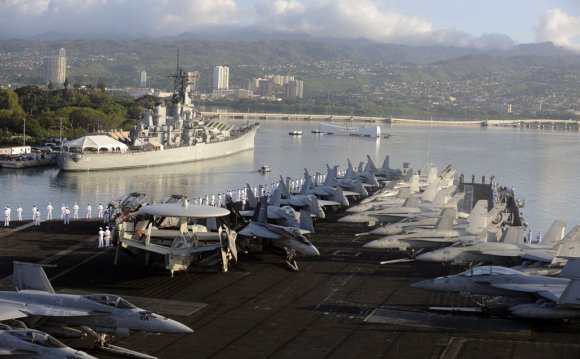 After the attack on Pearl Harbor, several things happened. On the isolated island of Nihau, a Japanese plane, crippled in the attack crash landed. A native Hawaiian disarmed the pilot of this plane. A message was quickly sent to the island of Kauai requesting assistance. While being held, the pilot of the plane convinced a Japanese descendant on the island to let him go and give him his weapons back and a rampage started after this.

Two locals, Benhakaka Kanahelea and his wife, were captured by these two Japanese men. They ended up jumping their captors and getting away. Kanahelea received gunshot wounds to the groin, stomach and his leg. He managed to pick up the pilot and throw him against a wall. This pilot then shot himself and this ended the short “Battle of Ni’ihau”.

After the attack on Pearl Harbor, the army anticipated that the Japanese were going to land there in force. Around the perimeter of all the main islands, American troops took up positions. They put up barrier son the beaches to deter landings and all of the airports in Hawaii were taken over by the army with all private planes grounded. The ROTC units from the University as well as Hawaii Territorial Guard units were mobilized. Hawaii’s Territorial Governor Poindexter voiced opposition to the declaration of Martial Law. A declaration was made by General Walter C. Short and he announced that the Hawaii Territorial Government would be under his control as the Military Governor of Hawaii. There were blackouts, curfews, and other restrictions in place during the Martial Law. The mail and the news were also censored.

After the attack on Pearl Harbor, many government buildings such as ‘Iolani Palace became military offices. The civil courts were replaced with military law and this impacted both military personnel as well as civilian. The islands became one large military base and businesses owned by Japanese civilians were closed. The FBI, army, and local police arrested anyone they considered to be a threat. Residents were fingerprinted and required to carry identification cards at all times. Businesses and residents could not hold more than $200 cash with them. People thought the Martial Law would only last a short time, but this lasted for almost three years. Curfews and blackouts even lasted to July 1945.

After the attack on Pearl Harbor many people of Japanese descent were taken to detention centers, but these could not hold everyone. A plan was devised to move 100, 000 Japanese from Hawaii, but this never took place. In February 1942, shortly after American joined the war, an Executive Order was issued by President Roosevelt which authorized that Japanese-American citizens were to be rounded up and then placed in “relocation centers.” These were located in different states like Idaho, Utah, California, Arizona, Wyoming, Arkansas, and Colorado. Over 120, 000 Japanese were impacted by this and about 80, 000 of these were U.S. citizens.

There was overcrowding in the camps and poor conditions. The food was rationed and there were no plumbing or cooking facilities there. Detainees were offered to be released if they agreed to join the army. This was not accepted by many and only 1, 200 enlisted.

President Roosevelt rescinded the Executive order in 1944, but it took till the end of 1945 to close all these camps. In 1968 the U.S. Government began to pay compensation to Japanese families for property they lost during the war. This was only given to 60, 000 that had survived long enough to receive the compensation.

The Best Scenes Of Pearl Harbor