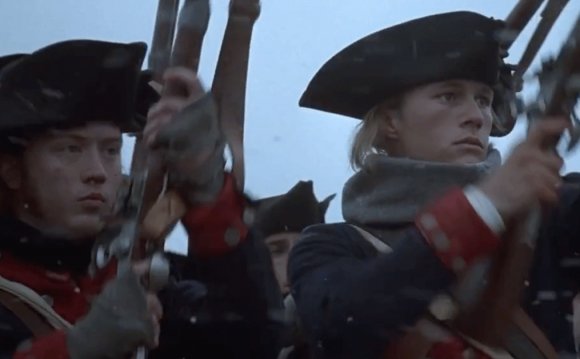 I read Harlow Giles Unger’s biography of Patrick Henry Lion of Liberty over the weekend (I think the rest of this summer is going to be a lot of alternating between the Founding Fathers and big science fiction novels), and it struck me all over again how few movies we have about the Revolutionary War. I’d looked into this a couple of years ago, but it’s really kind of stunning. The success of America’s war for independence from Great Britain is incredibly remarkable, the people who prosecuted that war are referenced constantly in our current political conversations, and yet we don’t have more than a handful of movies about the conflict or the people who ran it. April Morning, Benedict Arnold: A Question of Honor, The Crossing, John Adams, and Valley Forge are all television projects. The last big Revolutionary War blockbuster, The Patriot, came out in 2000, and even that wasn’t that enormous a success: it netted $113, 330, 342 at the domestic box office, just $3 million more than the movie cost to make.

So what’s the problem? I think there are a couple. First, Revolutionary War action sequences are a real challenge. We are too distant from the realities of musket and bayonet fighting, and there’s no way the scenes will seem as exciting as Michael Bay and the Siege of Chicago or any other big Transformers-style action spectacles. But if you get up close and personal with what it takes to kill someone else by sticking a large but not necessarily very sharp blade into them, you’re hitting hard-R territory. World War II battles are in closer accord with what we consider exciting, there are explosions, rapid movements, and larger-scale engagements. Plus, the stakes are familiar. America v. Hitler’s a debate that can be solved with unusual swiftness.

And therein lies the second challenge of Revolutionary War movies. America v. King George III is also a relatively easy debate to settle quickly, but George III isn’t really manifestable, the Atlantic Ocean dilutes the conflict a bit. And besides, the real debate is between the Founding Fathers themselves, and their successes and failures lay the groundwork for everything from the Civil War to the treatment of Native Americans. But those conflicts pay off down the road. And getting folks in their seats for a battle royale over the question of whether Locke or Plutarch’s more correct about the nature of law isn’t necessarily easy. Given the distorted debates about our Founders, their goals, intentions, and outlooks, movies about the nature of Americans’ origins could get awfully didactic and limited awfully quickly.

And finally, these are complicated men. Thomas Jefferson’s relationship with Sally Hemings? Patrick Henry’s rather clueless move to take for his second wife a woman his son was in love with? The Founders are hard to make movies about if we treat them if they’re distant gods, so wise and so important as to be divine — we can’t reckon with that. But we don’t necessarily want to reckon with them as men either. We’d rather believe the Founding Fathers across the board had modern ideas about slavery than accept the messy, ugly compromises they made both in their personal and political lives. If we’re so anxious about their beliefs, we’re probably not ready to accept them as full persons.