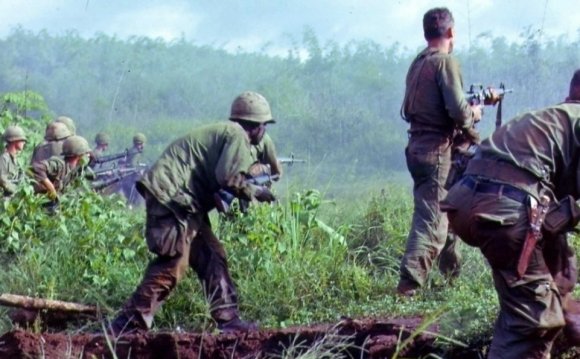 For the past several decades, the Vietnam War has been the subject of intense scrutiny in the United States. Documentary films, best-selling books by veterans, Maya Lin's moving Vietnam Veterans Memorial - all have spurred the debate over how to interpret this controversial war. Seldom, however, have people in the United States ever examined the war from anything other than their own standpoint. How did the Europeans view the war? And what was the extent of the involvement by the two major Communist powers, Russia and China?

Recently, historian Qiang Zhai visited the Woodrow Wilson Center to talk about his new book China and the Vietnam Wars, 1950-1975. Zhai has written extensively on China and its participation in the Cold War. His latest work gleans new insights on China's role in Vietnam from documents that were recently released by the Chinese government.

Web intern Tim DiIorio conducted the following interview with Zhai (below) during his visit to the Center.

DiIORIO: As a Chinese scholar, how did you get interested in the topic of the Vietnam War?

ZHAI: I've been interested in the Vietnam War for a long time. Whenever I read existing books on the Vietnam War, they mostly talk about it from an American perspective, drawing lessons about American mistakes. American scholars speculate about the Chinese role, but partly because of a lack of Chinese documents, they have no idea about the extent of China's involvement.

As for the Vietnamese, they don't talk about the Chinese role because of their nationalist pride. They want to think that they won the war on their own, without any help from China.

My book is the first English-language volume to look at the Vietnam War from the Chinese perspective. The Chinese government recently released some materials about China's role in the war. This gave me an opportunity to fill in the knowledge gap. Chinese scholars have produced some military histories that cover the Vietnam War, but my book is the first attempt to make this kind of information accessible to Western readers.

Nowadays there's growing interest among American scholars and the reading public about what was happening on the so-called "other side" of the Vietnam War. What did the Chinese think? Only when you have a better knowledge of the other side can you evaluate American policy.

DiIORIO: You said you examined newly released Chinese archival sources and other documents. What new insights did these documents yield - how does your book change the perceptions of Chinese-Vietnamese relations during the Cold War?

ZHAI: First and foremost, the book sheds new light on the actual relationship between Chinese and Vietnamese Communists. My study revealed that their relationship was very close. The book begins with the events of the late 1940s, when the Vietnamese Communists were fighting the French. The Chinese Communists came to power in 1949, and Ho Chi Minh went to China asking for help with his war against the French. Mao was eager to oblige because he had the ambition of spreading his formula for making revolution to neighboring countries in Asia. He wanted to demonstrate that his formula for a "people's war" would apply within the pan-Asian Communist movement.

In addition, there was an international division of labor between the two major Communist powers, the Soviet Union and China. In the late 1940s and early 1950s, Stalin paid attention to supporting the Communist parties in Eastern Europe, while Mao was expected to encourage the Communist movements in Southeast Asia. Thus in the early 1950s, the Soviet role in the Vietnamese struggle was minimal. There's no evidence that the Soviets had advisers in Vietnam or gave the Vietnamese materials. On the contrary, the Chinese starting in 1950 sent political and military advisers, weapons, and supplies to the Vietnamese to help them with their war against the French.

Ho Chi Minh was very eager to learn, I must say. He was essentially following a long-established pattern of interactions between the Chinese and Vietnamese. If you look back in history, Vietnamese emperors and leaders looked to China for models of how to do farming, how to modernize their society, and so on. They readily adopted Confucian values and institutions. I should add that the Chinese-Vietnamese relationship wasn't a simple one of teacher-student. There's another side to the picture, full of tension and friction.

The Chinese gave Ho Chi Minh and his movement a lot of support, but this didn't mean he was China's puppet. He was his own master and set his own agenda. Sometimes this conflicted with what China had in mind. The clearest example of this occurred following the Geneva Conference of 1954. After that conference, the French withdrew from Vietnam. Ho Chi Minh had the dream of expanding his success from north to south and unifying the country.

Was Americas involvement in the Vietnam War worth it?