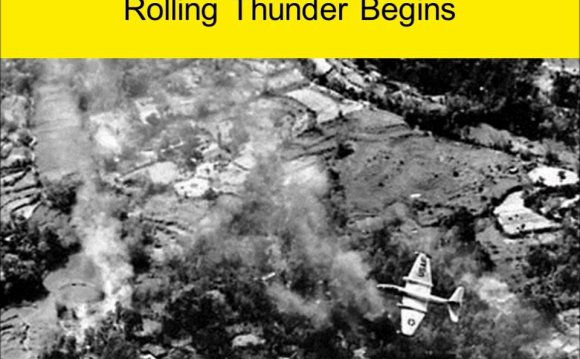 The call by South Vietnamese Prime Minister Nguyễn Khánh on July 19, 1964 to expand the Vietnam conflict led to an operation of gradual and sustained U.S. aerial bombardment of North Vietnam known as Operation Rolling Thunder. The mission was meant to boost the morale of the Saigon regime; force North Vietnam to cease support for the Communist insurgency in South Vietnam; destroy North Vietnam’s transportation system, industrial base, and air defenses; and interdict the flow of fighters and materiel into South Vietnam.

The sustained bombing lasted for more than three years and finally stopped in October 1968 as the U.S. worked to advance a negotiated settlement with North Vietnam. Some historians assess that the bombing campaign was nearly successful in crippling Hanoi’s capacity to wage war, but others argue that rules of engagement put in place to avoid provoking China and to minimize damage to major cities in North Vietnam undermined Rolling Thunder’s effectiveness.

To learn more about the conflict, see Vietnam, a Look Back, and other Moments on Vietnam.

O’NEILL: Nobody should also in any way think that [Vietnamese Communist revolutionary leader, Prime Minister and President of the Democratic Republic of Vietnam] Ho Chi Minh was an agrarian reformist. He was a nationalist Communist dictator cruel to his own people in the North. One only has to look at what he did for North Vietnam vis-a-vis what Ngo Dinh Diem [President of Vietnam from 1955-1963] did for South Vietnam.

North Vietnam was always, under the French and under the Chinese, the richest part of the country with all the natural wealth. The South had the food. The question later developed of how these two parts of the country could survive economically.

I think, until about 1964, the State Department was the body that moved the foreign policy in Vietnam and then came General [William] Westmoreland. Westmoreland was as narrow-minded as any general I’ve ever read about. He makes McClelland, the Civil War general, look like a brilliant, opportunistic Stonewall Jackson.

There was a great, great general there at that time by the name of General [Lewis] Walt, a United States Marine Corps general. He had started two programs. One was called “Kit Carson.” This was a program whereby a Marine squad or a Marine platoon (but no bigger) was integrated with a Vietnamese squad or platoon.

They would each feed a meal to the other every other day. Lunch would either be Vietnamese or American, then the next day the opposite. They would live in the villages and they would stay there for six to nine months.

It was good. It worked for about seven, eight, nine months until the North Vietnamese Army (NVA) finally crossed the DMZ. When the NVA came across, they were too big to handle [by the smaller] units. [Such small unit tactics were] good if they were going to fight guerillas.

When the NVA came, Walt said, “Look, we can’t defend the whole damned I Corps with what I’ve got, which is about two and a half Marine divisions. Let’s do this. We will protect the DMZ down along Route 1 and from the coast in about 30-40 miles, 50 maximum, all the way down.

“We will then have a major road, the railroad, the sea, and the major cities, and the most fertile land and at least 75-80% of the population. We will hold this. We will protect this. We will fight in the other parts. We will then build Adrian’s wall. When we see them sort of getting up together, we hit them with everything: the planes, the task force, etc.”

Now, here you have this long fight. There is no way we could win because Ho Chi Minh and his army were willing to fight to the last Vietnamese in North Vietnam and South Vietnam.

MATTHEWS: I think that we certainly gave more credence to reports from the Embassy in the political section than we did to the military reports on what was going on. Already I think there was a lot of lack of confidence, a substantial lack of confidence, in much of the military reporting as well as in the famous Hamlet Evaluation Survey (HES) survey….

They were, after all, basically called “progress reports” and so the implication to start with was that this was progress. So I think there was a lot of feeling that much of this was just hype, was not really true, that they tried to always look at the brighter side of things. But nevertheless there seemed to be a general improvement in the situation; our forces were making a significant difference in what was happening there.

There were of course, continuing reports of the increasing and continuing North Vietnamese movements into the South. There was a lot of frustration over our inability to stop the movement down the Ho Chi Minh trail, despite all sorts of efforts to try to stop it, including, I think, dropping some kind of detectors along the trail to detect movement, B-52 bombings, all of this kind of thing. But nevertheless, the North continued to move things south.

So I think there was obvious frustration on the part of the military that this wasn’t helping very much. There was also concern that perhaps the bombing of North Vietnam was not accomplishing what it was intended to do.

Once again, our whole idea was that a “rolling thunder, ” which our bombing raids were called, would just continue to increase the pressure on North Vietnam, and that eventually the North Vietnamese would see that this relentlessly increasing pressure was going to be so severe that they were going to have to give up.

Well, this didn’t work. It was a miscalculation on our part or a misunderstanding of North Vietnamese determination. They simply just kept going regardless of what the price was. I think a lot of us also began to have the feeling that air power was not something that ever was going to win the war.

I have ever since had a great deal of skepticism about the possibilities of “surgical strikes” even when they’re with the wonderful new equipment that was shown in the Persian Gulf War. I think some of that is still a lot of nonsense.