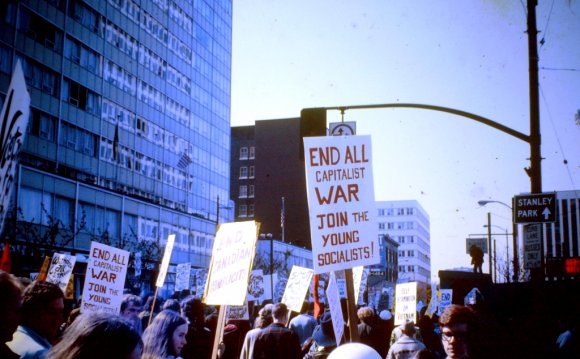 PRINCETON, NJ - Will the war with Iraq turn into "another Vietnam" for the United States? Sunday, on ABC's "This Week, " Republican Sen. Chuck Hagel stated that the situation in Iraq is not "dissimilar to where we were in Vietnam, " and that "the longer we stay there, the more similarities [to Vietnam] are going to come together." White House counselor Dan Bartlett responded: "We respect Sen. Hagel. He's a decorated Vietnam War veteran. But we couldn't disagree more."

It is obviously too early to predict the verdict of future historians who will compare the two wars. There are significant differences between them, and the Iraq conflict has not yet approached the depth of U.S. involvement in Vietnam, which saw more than 500, 000 U.S. troops deployed in that country by 1968 and which ultimately resulted in more than 58, 000 U.S. military deaths.

Still, the Iraq war was a major theme in last year's presidential election, as was Vietnam in the elections of 1968 and 1972 - and the Iraq war is now a dominant subject in news coverage, just as Vietnam was in the 1960s and early 1970s.

An important focus today is the battle for public opinion on Iraq - as eventually it was in Vietnam. Recent polls showing declining support for the Iraq war in the United States have received much media attention. This has not only prompted President Bush to make speeches explicitly asking for continuing public support for the war (two speeches on Iraq this week alone), but has, in addition, provoked commentators to begin invoking the Vietnam comparison. The highly publicized protest vigil of Cindy Sheehan outside Bush's ranch in Crawford, Texas, has also provoked memories of the protests that ultimately played such a large part in the Vietnam saga.

Just how comparable are the two wars as far as public opinion is concerned? That's a difficult question to answer in many ways. Many of the questions asked then about Vietnam and now about Iraq are quite specific to the circumstances involved and do not allow for perfect comparisons. Plus, the environment in which the Vietnam War played out was significantly different from the environment now. Vietnam began in the middle of the Cold War, just 20 years after the conclusion of World War II. Iraq began in the middle of a "war on terrorism" declared by the Bush administration in the wake of the terrorist attacks of Sept. 11, 2001.

But, there are several Gallup Poll questions asked during both wars that provide some public opinion comparability. An analysis of the trend patterns for each provides important insights into the nature of public opinion in both situations.

Gallup asked the public to assess whether the United States made a "mistake" in sending troops into Vietnam, and has asked the same question since March 2003 about Iraq. Gallup consistently asked Americans to name the "most important problem" facing the country during the years of both conflicts, and to evaluate how the presidents involved were handling both war situations.

The bottom line: Americans were much quicker to consider the Vietnam War to be a major problem facing the country than has been the case for the Iraq war. But at the same time, a majority of Americans began to call Iraq a "mistake" within about a year and three months of its beginning, while it took over three years for a majority to call Vietnam a mistake. Lyndon Johnson's job approval ratings for handling Vietnam dropped to lower levels than has been the case - so far - for George W. Bush.

One of Gallup's key measures used to assess public support for both the Vietnam War and the current war in Iraq asks Americans whether or not it was a "mistake" to send troops to those countries. The data trends for both wars (that is, every time the question was asked about Vietnam and every time it has been asked about Iraq to date) are presented in the accompanying graphs.

As the graph illustrates, Americans have become negative about the war in Iraq more quickly than they did for the Vietnam War.

The latest quarterly average for Iraq shows that 50% say it was a mistake to send troops (the most recent single measure on this indicator, from an Aug. 5-7 Gallup Poll, shows 54% saying the war was a mistake).

(There is one caveat in these comparisons: A larger percentage of Americans in the Vietnam years said they did not have an opinion about Vietnam than has been the case for Iraq.)

Pop-culture Heroes vs a Real Hero of the Vietnam War ...