When did the Vietnam War happened 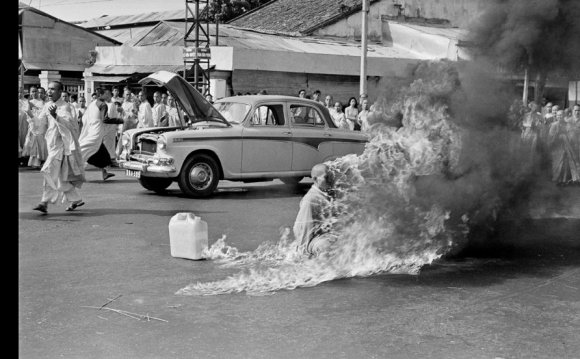 What if? That’s the question that’s always applied to President John F. Kennedy, who was assassinated 50 years ago this month.

One of the biggest “ifs” is what would have happened regarding the Vietnam War if he had lived. The war escalated under Kennedy’s successor, Lyndon B. Johnson, and eventually claimed more than 58, 000 American lives, along with countless troops from South and North Vietnam, and of course civilians.

On why the U.S. decided to support a regime change

“The key development for Kennedy was the so called ‘Buddhist Crisis, ’ which began in the spring of 1963. These monks and their supporters accused Diem of religious discrimination and persecution. Diem was a Catholic, a member of the Catholic minority, and the Buddhists accused him of trying to suppress their religious freedom. These protests attracted a lot of attention, especially after one of the Buddhist monks burned himself to death on a Saigon street corner. Among those who saw the very famous photograph of that event was President Kennedy. And I think the breaking point for Kennedy came in August of 1963, when Diem decided to use force to suppress the movement—that was the moment that Kennedy opted for regime change.”

“In the year after Diem’s death, South Vietnam had a revolving door series of very weak governments. The generals who overthrew Diem were only in power for about three months. Meanwhile, Communist leaders in North Vietnam decided that after the coup, to rapidly escalate their war effort in the south. Their goal was to bring about the collapse of the South Vietnamese state before the United States could intervene with its own troops. This Communist escalation, this gamble to win the war quickly by North Vietnam, ultimately failed because it provoked Lyndon Johnson to launch his own American escalation. And so in 1965, the U.S. begins bombing North Vietnam and sent hundreds or thousands of troops to the south. So there is no doubt that the coup led directly to the escalation of the war and that it would have disastrous consequences both for Vietnam and the United States.”

“I don’t think that he would have taken the path of massive escalation that Johnson did; however, I don’t think that he would have opted for an immediate withdrawal either. I suspect that Kennedy would have chosen some kind of middle course and I think that he might well have done something not unlike what Barack Obama would later do in Afghanistan in 2009. In Afghanistan, of course, Obama chose short-term escalation, followed by a phased withdrawal of U.S. troops. Having done this, I can also imagine Kennedy trying to seek some sort kind negotiated deal, some sort of settlement that would have allowed for the so-called ‘neutralization of South Vietnam.’”

By all accounts, the welcome ceremony that took place at Tan Son Nhut airport in the late afternoon of June 25, 1954, was a subdued affair. It was witnessed by a crowd of several hundred people gathered on the airport tarmac, beneath the silver fuselage of a French commercial airliner. The plane had arrived just minutes earlier, completing the last leg of its long journey from Paris to Saigon. As the crowd watched, a short figure in a white suit descended the staircase that had been rolled up to the rear door of the aircraft.

On the ground, Ngo Dinh Diem solemnly shook hands with the officials and political leaders who were waiting for him. His greeters included some of the most powerful men in Indochina. The first was a senior general of the French colonial army, who was attending on behalf of the French high commissioner. As an official of the colonial state, the general was a symbol of France’s determination to maintain a measure of control over the Indochinese empire it had ruled for nearly a century. Next to welcome Diem was Prince Buu Loc, a member of Vietnam’s royal family. Buu Loc was attending the ceremony in his capacity as the caretaker prime minister of the State of Vietnam (SVN), the anticommunist Vietnamese government that had been established under French auspices five years earlier. Though Diem had come to Saigon to replace Buu Loc as premier of the SVN, protocol obliged the prince to welcome his successor.

Standing behind Buu Loc were several other high-ranking government officials, including the senior commanders of the SVN’s armed forces. Also in attendance were leading members of the foreign diplomatic corps, including the U.S. ambassador to Vietnam, Donald Heath. Although he did not command any armies or assert any claims of sovereignty over Vietnamese territory, Heath was an influential figure in Saigon politics. As the official with responsibility for a massive program of military and economic aid for French forces and the SVN, the head of the U.S. mission was not a man to be taken lightly.

Despite the presence of so many of Indochina’s most prominent person- alities, the welcome ceremony for Diem was surprisingly brief and low-key. After exchanging pleasantries with the new arrival, the French general and the Vietnamese prince delivered short speeches of welcome. Observers noted that Diem seemed ill at ease as they spoke, and that he did not address the crowd after they had finished. As soon as the ceremony concluded, he climbed into a waiting limousine and sped away.

When did the Mahabharata War Happen -- Mars Evidence 3 of 8

When did the Mahabharata War Happen -- Mars Evidence 4 of 8

Why did US lose the Vietnam War?