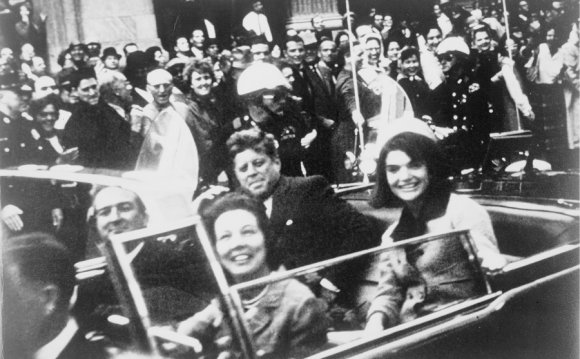 It's Presidents Day, which means we should all take advantage of the 40 percent sale happening at Bed Bath & Beyond right now like any true American.

Besides getting a good deal on bath towels, Presidents Day is also a good day to find out some new, interesting facts about the people who lead our government. So in honor of this great day, we've gathered our favorite lesser-known-facts about the leaders of America.

5. James Monroe has a capital named after him

6. John Quincy Adams was a free spirit
Adams was a fan of the early morning skinny dip-session during his presidency.

7. Andrew Jackson's bird had a potty mouth
Jackson taught his parrot how to curse to the extent that the parrot had to be removed from the president's funeral because it was cursing too much. That's one way to leave a legacy.

8. Martin Van Buren may have started a popular phrase
Van Buren was raised in Kinderhook, N.Y., and his nickname was "Old Kinderhook." A popular hypothesis is that the colloquial saying OK stems from the OK clubs that began in support of his election campaign.

10. John Tyler was really unpopular
It looks like at the time of his death, Tyler was quite unpopular. His 1862 New York Time's obituary stated Tyler was "the most unpopular public man that had ever held any office in the United States."

11. James Polk was an underdog
Ever the underdog, Polk was America's first dark horse presidential candidate.

12. Zachary Taylor died in a weird way
What exactly was Taylor's legacy? We're not exactly sure. But we do know that his sudden death had something to do with eating cherries and milk.

13. Millard Fillmore fulfilled every schoolboy's dream
Looks like teenage dreams really do come true. Fillmore's first wife was actually his teacher when he was a 19-year-old schoolboy at New Home Academy.

15. James Buchanan was an eternal bachelor
Buchanan was the only president never to marry.

16. Abraham Lincoln could throw it down
Good old Abe apparently knew had to handle himself in the ring. As a young wrestler, Lincoln was defeated only once out of approximately 300 matches.

17. Andrew Johnson was wasted during his inauguration
Johnson was noticeably drunk during the inauguration ceremony after drinking too much whiskey beforehand.

18. Ulysses S. Grant was a gifted writer
Grant could whip up quite the prose. His autobiography is considered to be the best-written presidential autobiography.

21. Chester A. Arthur was a huge sartorialist
Arthur owned 80 pairs of pants and was known for taking late night strolls around D.C. with his friends and sauntering back at three in the morning.

22. Grover Cleveland changed his name
Cleveland's real first name was Stephen but he switched to Grover as an adult. Grover does have a certain edge to it.

23. Benjamin Harrison pseudo-Luddite?
Harrison was the first president to have electricity in the White House but was so terrified of getting electrocuted that he would never turn on the switches himself.

24. Grover Cleveland was one unhealthy man
Cleveland was named Fitness Magazine's least-healthiest President due to the fact that he loved drinking beer, cigar smoking and weighed 250 pounds.

25. William McKinley had a lucky charm that really worked
McKinley wore a red carnation on his lapel almost all the time for good luck. One time in 1901, he gave his carnation to a little girl and was instantly shot by an assassin immediately after. He died eight days later.

26. Teddy Roosevelt practiced a "the show must go on" mentality
Once while delivering a speech in Milwaukee, Roosevelt was shot in an assassination attempt. "I don't know whether you fully understand that I have just been shot, " he told the stunned audience. "I give you my word, I do not care a rap about being shot; not a rap." He went on to finish the hour and a half speech with a bullet lodged in his chest.

27. William Taft was too big for this world
The largest president in American history, Taft got himself stuck in the White House bathtub and had to call help to get himself out.

28. Woodrow Wilson was the eternal student
Despite the fact that he didn't learn to read until he was 10 years old, Wilson is America's most educated president. He is the only president to have earned a Ph.D., which he earned from John Hopkins University in political science and history.

30. Calvin Coolidge was pretty chill
During his presidency, Coolidge woke up in a hotel room to find a burglar going through his things. Coolidge struck up a conversation with the man and found out he was a student who needed money to pay for college. Coolidge asked the man to hand him his wallet and gave him the $32 that was in in there and told the student it was a loan. He then instructed the student to leave the way he came to avoid being caught by the Secret Service.

31. Herbert Hoover had an unusual pet
Hoover's son had two pet alligators that were permitted to run around throughout the White House.

33. Harry S. Truman had a fake middle name
The "S" in Truman's name did not stand for anything because his parents couldn't agree on a middle name for over a month.

34. Dwight Eisenhower was an artist
Eisenhower painted over 250 known pieces of art.

36. Lyndon B. Johnson was a womanizer
Johnson had so many extramarital affairs during his presidency that his aides referred to the girls he had affairs with as his harem.

37. Richard Nixon was a cardshark
While in the Navy, Nixon realized that his friends were winning money at poker games. Wanting to get in on the action, Nixon had someone teach him poker and within a few months he won around $6, 000. He used that money to fund his first congressional campaign.

38. Gerald Ford had plenty of career options
Ford worked as a fashion model during college and appeared on the cover of Cosmopolitan. He also could have played for the NFL.

39. Jimmy Carter believed in UFOs
In 1973, Carter filed a report for a UFO sighting.

40. Ronald Regan did stand-up
In 1954, due to his acting career taking a turn for the worst, Regan did a stand-up gig in Las Vegas for a few weeks.

41. George Bush was very athletic
In high school Bush was captain of his varsity baseball and soccer team and also played basketball.