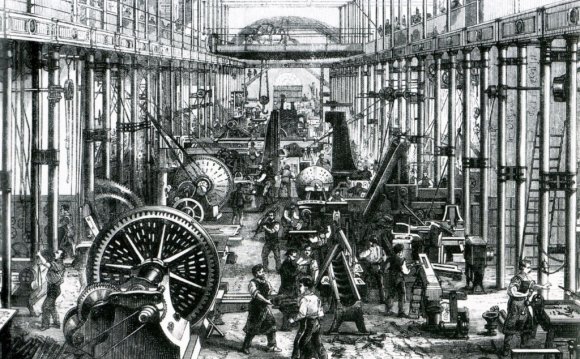 Shortly before his death in 1883, the historian Arnold Toynbee suggested that in the years after 1750 there was both an agricultural and an industrial 'Revolution'. Many historians now challenge this idea. They put the turning point much earlier, and suggest that change was much more gradual than Toynbee said.

Nevertheless, it is impossible to deny that the years after 1750 were a time of great achievement:

At the same time there occurred a long list of scientific discoveries and technological inventions that changed society and industry.

The economic developments of the 1800s did not just change the economy – they changed the nature of life, not just in Britain, but all over the world.

You can track through time the facts and impact on Britain's economy, trade and empire by comparing the 1800s to the Middle Ages and Early Modern times, and also to the 20th century in The UK economy through time.

From a rural Britain to an industrial revolution !!