What started the Industrial Revolution in Britain? 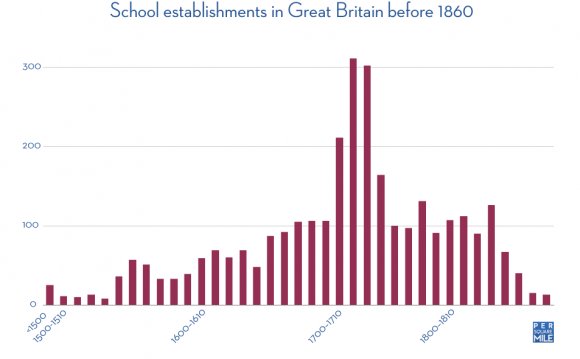 Many observers of modern social science are convinced of the maxim: 'There are three kinds of lies: lies, damned lies, and statistics'. Yet good historical scholarship has always used statistics as the antidote to the ‘damned lies’. This is especially useful with the Industrial Revolution, where wild theories dominate. Below I examine three famous theories of the Revolution and show why they do not tell us the whole story.

Underpinning my analysis is the recent work of Professor Nicholas Crafts, Professor of Economics and Economic History at the University of Warwick. In November the Legatum Institute welcomed Professor Crafts to explore the question: ‘why Britain got there first?’

What do we understand by ‘Britain was first to industrialise’? Professor Crafts is one of the leading scholars unpacking the Industrial Revolution and his work reveals a number of salient points. First, there was no great ‘take-off’ in industrialisation or productivity: in Britain industrial employment increased by just 12% between 1759 and 1851, similarly total factor productivity increased by just 0.4% a year until the 1830s. By 20th century standards such growth was underwhelming.

Second, the ‘great divergence’ had already occurred by the time Britain was industrialising. Real GDP per person was far higher in Britain, the Netherlands and Italy than in China by 1600: the West was far ahead of the rest by the time of the Industrial Revolution.

Third, Crafts shows that industrialisation was concentrated in a limited number of sectors, such as textiles, and largely bypassed the service industries.

Despite these reservations, something remarkable did occur. By the middle of the 19th century Britain accounted for 23% of global industrial production, British workers were the richest in Europe, and comparatively few of them worked on the land. What is clear is that this unique position was not the result of a century of rapid change; Britain’s was a slower, more incremental revolution than previously thought.

How to explain this revolution? Three different historians offer an economic, a social and a genetic explanation, yet, to differing degrees, all three are found wanting.

Most successful is Robert Allen who puts forth a compelling argument in The British Industrial Revolution in Global Perspective. Britain’s success was the result of relative prices and market potential. Allen argues that in Britain wages were high, while capital and energy were cheap. Britain also provided a large market for manufactured products. The result was that it made sense to invest in the spinning jenny in England, while it did not in France.

However, this picture is too simplistic. While British workers were paid more than their French counterparts, even at lower French wages, adopting the jenny would still have been profitable (albeit less so). Similarly, American workers were paid more than their British counterparts, but industrialisation did not take off there.

Joel Mokyr in The Enlightened Economy: an Economic History of Britain 1700-1850 posits that the Enlightenment meant that Britain was best positioned to take advantage of the ideas and equipment of the age. While many European states benefited from the Enlightenment, Britain was alone in possessing an adequate supply of skilled craftsmen who were afforded the freedom to be entrepreneurial. Mokyr’s theory incorporates many of the elements that economists have identified as important for economic growth such as human and physical capital, research and development and effective institutions.

Nevertheless his work is somewhat light on evidence. For every piece of effective government legislation of the period, such as the repealing of the Corn Laws, there is a counterpoint of deleterious action, such as the failure to effectively regulate the railways. Similarly, for every Baconian experimenter such as Josiah Wedgwood who would have encountered Enlightenment ideas, there many, such as Richard Arkwright, who were less likely to have been raised on Enlightenment teaching.

Least successful is Gregory Clark who moves further from the realm of inductive reasoning than Mokyr. Clark in A Farewell to Alms: A Brief Economic History of the World argues that Britain’s Industrial Revolution was a rapid transformation bought about by demographic and genetic changes. The salient point in Clark’s account is that the higher birth rates of the upper classes meant that their offspring formed an increasingly large part of the British population. As they did so they spread their genes and work ethic through a larger swathe of the populace, powering the Industrial Revolution.

Clark’s claim is controversial but thankfully statistics can be used to evaluate it. Clark is correct that some of the upper classes had higher birth rates than other segments of the population; however, this was also the case in many other European countries and in China. So why was Britain’s experience unique? Unfortunately Clark fails to give an answer to this question and his overall thesis, that Britain experienced particularly rapid change around 1800, fails to account for the data assembled by Crafts and outlined above. In this case statistics are clearly the antidote to an unsubstantiated theory.

In all disciplines there is a struggle between facts and theories. For years this was the state of affairs in economics, as mathematical models replaced engagement with facts and data. Historians would be wise to not to repeat this mistake. Crafts and others like him are doing the discipline a great service by providing the evidence with which to examine competing claims. Doing so may result in the dismissal of more theories than in their generation but as Thomas Edison said:

Negative results are just what I want. They’re just as valuable to me as positive results. I can never find the thing that does the job best until I find the ones that don't.

Urbanization and the First Industrial Revolution in Britain