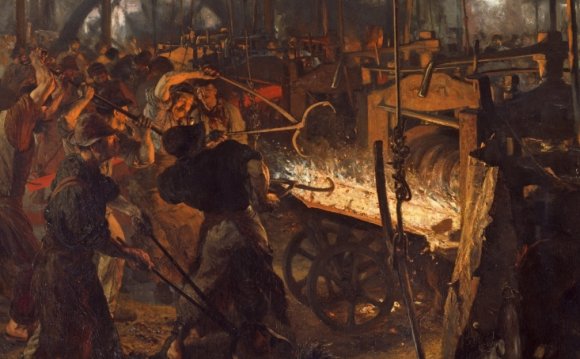 The Industrial Revolution and the Development of Steel

The Industrial Revolution was characterized by enormous growth in many areas of industry: mining, transport, and construction to name but a few. This growth set up a demand for more raw materials, and in many cases, for new materials with better properties that did not yet exist. As these new materials were developed, by design or by chance, new applications sprang up to make use of them, creating further demands and so on. One of the features of the Industrial Revolution is the plethora of new materials that became available, and the upsurge in manufacturing methods that made use of them. Metals, fibres and even the early precursors of modern plastics were available in unprecedented variety and quantity.

In the 1700s iron was by no means a new material, it had, after all, been around since the Iron Age nearly 3000 years earlier. However, production of iron was restricted to small-scale smelting of iron ores, and the amount that could be produced was limited. Iron was produced by smelting it with charcoal (wood that has been heated in the absence of air to burn off the impurities in the wood and leave it enriched in carbon: this partial burning produces an excellent fuel which is much more effective than wood itself). Britain had depleted huge areas of forest for fuel since the 1500s, and timber supplies for charcoal were not going to be a sustainable long-term solution. Legislation was in place to ban the harvesting of trees for charcoal production.

What was needed was a method by which iron could be smelted in serious tonnage quantities. This was going to need a better heat source than charcoal. Woods in Britain were becoming scarce with demands on them for both building timber and charcoal. Coal looked like it might be such a fuel. There was a problem, though: coal tends to have a high concentration of sulphur, which along with other impurities makes iron brittle. So iron produced by smelting with coal was of very poor quality.

The development of cast iron as an engineering material is very much the story of the Darby family, who developed large-scale methods of making this valuable material. Abraham Darby had the idea of using not coal, but coke to smelt the iron. Coke is made by controlled heating of coal in the same way that charcoal is produced from wood. Coke was the key step in developing a furnace capable of making cast iron on a large scale. This development in 1708 led to the cast iron industry being founded on the banks of the Severn at Coalbrookdale. The Old Furnace, parts of which still exist today, was the forerunner of the modern blast furnace (Figure 1). It was used to make the members of the first cast iron bridge, spanning the Severn at Coalbrookdale, which also still stands (shown right).

Figure 1: The Old Furnace at Coalbrookdale

In this furnace, coke, together with limestone and iron ore, was fed in at the top and heated by burning in air that was fed in lower down; the molten cast iron was extracted at the base. The air was fed in by pipes leading in about halfway up the furnace, which "blasted" a draught of hot air to the charge. The mechanical properties of the coke were important because the mixture had to be porous enough so that reduction of the ore proceeded smoothly, and it had to resist the weight of material above it. The molten iron could then be tapped and run directly into moulds. This furnace was especially important for making the key parts of steam engines. Some of the carbon of the coke dissolved in the iron (about 4%) to give the material a relatively low melting point, but also made the material relatively brittle. The limestone helps in the reduction process, and also mops up some of the impurities to form a "slag" that floats on top of the liquid iron, and can be removed separately.

The Second Industrial Revolution (Started by steel and oil)