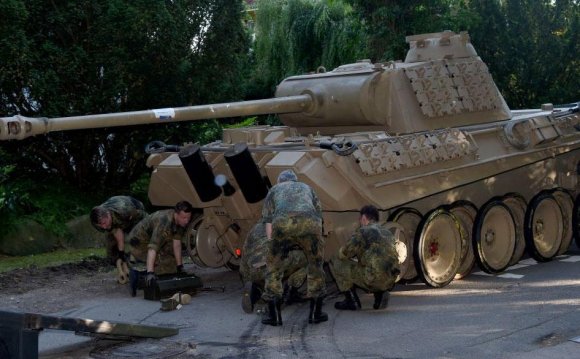 This behemoth was based on the hull of the Tiger II "Königstiger" (translates to Bengal Tiger, but called King Tiger or Royal Tiger from a translation error) and had 150mm of sloped frontal armour with a 250mm thick superstructure containing it's gigantic 12.8cm high velocity PaK 44 L/55. While this may not be the largest gun mounted on a tank, it was the highest caliber cannon to be mounted on a tank, other larger guns such as the guns mounted on the Soviet KV-2, SU-152, and ISU-152s were all low velocity howitzers designed towards destroying fortifications and use as artillery.
This makes the Jagdtiger the tank with the best primary armament for tank killing in the entire war, bar none.

The other metric used for lethality would be killing efficiency, that is which vehicle was capable of killing the most enemy vehicles for each vehicle lost, and depending on your definition of "Tank" you get two results. Unfortunately I was not able to find good statistics for any of these vehicles in my quick search, but these I would put money on.


This was the single most effective tank killing vehicle that Germany had in WWII, with more kills than even the famed Tiger I, King Tiger, and Panther.

The StuG III was primarily a defensive tank destroyer and had a low profile, making it easy to camoflauge and lie in wait of allied vehicles, and with it's powerful 7.5cm cannon it had little difficulty dispatching them.
Technically in this spot I could have put the "Ferdinand" as it truly held the record, about 10-12 kills for each loss depending on your source, however this was a vehicle put on an extremely limited production run whereas the StuG III was used throughout almost the entire war in it's different variations.

Second would be the behemoth known as the King Tiger.


Allied vehicles were incapable of penetrating this beast frontally due to it's immense 150mm of armour, sloped in the case of the hull. At closer ranges, the majority of allied vehicles could destroy the King Tiger from the side and rear where it had only 60-80mm of flat armour. The problem facing the allies was the difficulty of getting close, as the Germans were already on the defensive and so the Tiger IIs were often dug in and using their high velocity 8.8cm KwK 43 L/71 cannons to destroy vehicles from very long range, as their cannon was not only lethal, but accurate and with little shell drop and a high velocity, making it easy to both hit and kill allied vehicles even from ranges up to 2 km, however at that range hitting a moving target would still be quite an effort if the vehicle was moving perpendicularly to the King Tiger.

The fact that these vehicles were used defensively more often than offensively also had an enormous effect on it's kill to loss ratio, as even allied tanks had a tendency to destroy enemy vehicles if they acquired the target and fired first despite being so woefully inferior in terms of combat capability.

Yes, these tanks didn't have cushiony seats, and the Tiger II and especially the Ferdinand weren't nearly as mechanically reliable as the Sherman, but that doesn't mean it was more lethal and when answering a question about lethality you should not switch it to a question of which tank is best overall, a question which concerns itself with mechanical reliability, ease of production, speed of production, ease of repairs in combat, crew survivability, vehicle survivability, and finally the tank's actual lethality.

Every World War 2 tank of the World