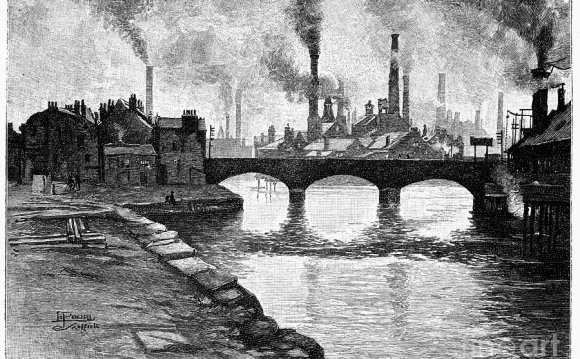 Courtesy of Bruce Adams and The Daily Mail

Since the beginning of the 8th century there has been a settlement in the location of modern Sheffield. This began as a small market town, and from the time of these early settlers the area quickly became known as an industrial town famed for the high quality metalwork, particularly swords and knives, made in the area.

In the 1400s Sheffield grew from a small market town to a larger base and quickly became England's best known source of cutlery of all kinds, second only to London, and even supplied this famed cutlery to the Royal family.

Throughout the 19th century the city of Sheffield, and the surrounding areas, produced steel, and both crucible steel and stainless steel were developed in Sheffield. Thanks to this popular industry Sheffield's population grew to ten times its size during the industrial revolution and many who didn't work in the steel industry were employed in the coal mines locally.

In the 1740s a form of silver plating, known as Sheffield plate, was developed in the area and once again the popularity of the products created locally grew, and with it the working population as people flocked to the city for work. This Sheffield plate is one of the city's more famous methods, where layers of silver and copper coat steel items to create an appearance similar to silver plating at a far more affordable price, meaning those on lower incomes could have plated items in their homes that were similar to the very popular silver plated ranges of the time.

This rapid growth led to a lot of rapidly built, poorly made homes crammed into a small geographical area, so when illness hit a few it quickly spread, leading to hundreds dying in the poor conditions of cholera in the 1800s, and sickness was a common part of life in these slum areas of the city.

Sheffield became known for being an 'ugly' city thanks to the rapid growth and increased population through the industrial revolution, with cramped living quarters and large areas of factory and industry buildings, making for very little green space. George Orwell famously called Sheffield the ugliest city in the old world in the 1930s, but in recent years a huge amount of investment in the area has changed the city's appearance from being closely built and industrial to a city filled with open, green spaces.

In fact, there are now over 250 gardens, areas of woodland and parkland, and public gardens in Sheffield, and the city is now famed for having the largest population of trees per person in all of Europe.

That hasn't meant that Sheffield has become less involved in industry, however. The city is still famous for the metal-works, the craftsmanship and the steel created in many factories, as well as by artisan crafters based in the area. After a difficult economy led to lower production, Sheffield has come through the worst and metal manufacture, metal working, and metal technologies are once again thriving in and around Sheffield.