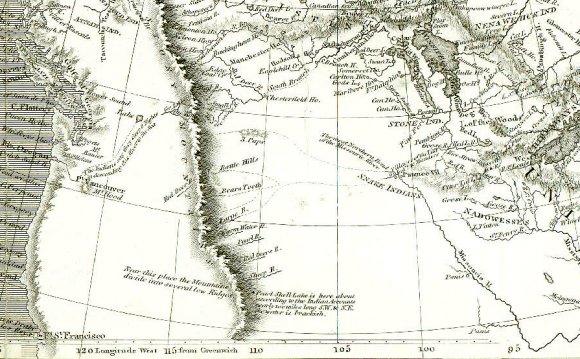 "Nature's silence is its one remark,
and every flake of world is a chip off
that old mute and immutable block."
–Annie Dillard, Teaching a Stone to Talk

Fig. 1
"this rock I called the tower"
– Meriwether Lewis
Pass cursor over photo to read details.

Bob Rumney, a rancher who lives southeast of the town of Cascade, Montana, eight miles down the Missouri (behind the photographer), shot this view of Tower Rock from his powered parachute. The view is generally south-southwest; the rock's azimuth is about 210° or, in Lewis and Clark's terms, S30°W. Visible beyond the Adel Mountains, 21 miles upriver, is the valley in which "Ordway's Creek, " now Little Prickly Pear Creek, enters the Missouri. The settlement called Hardy, out of the picture at lower left, was a way station on the Great Northern Railroad from 1888 until 1915. There was even a school there for a few years, with some of the students having to boat across the river to attend.

Lewis walked into Clark's "canoe camp" at about 9:00 a.m. on July 13, having "bid a cheerfull adue" to the upper portage camp at White Bear Islands (see "The Falls and Portage"). Clark's four axmen were busy completing two new 3-foot-wide cottonwood dugouts—one 33 feet long, the other only 25—to take the place of Lewis's "experimental" iron-framed, skin-covered canoe that had been abandoned as a failure. That was the day when he mused, "we eat an emensity of meat; it requires 4 deer, an Elk and a deer, or one buffaloe, to supply us plentifully 24 hours." More of a reflection than a statistic, it hid his gloomy angst over the probability that, as the Indians at Fort Mandan had predicted, game would be scarce once they entered the Rocky Mountains.

Meanwhile the six old canoes, carrying two men each under the command of Sergeant Ordway, brought the company's baggage from White Bear Islands up to Clark's camp, arriving at noon on the 14th. That morning, Lewis climbed a bluff northwest of the river, near the mouth of "Fort Mountain Creek, " and took compass bearings on the three chains of the Rocky Mountains he believed he could see from there. (But see "Seeing Things" in Grasping the Rockies, especially footnote 8.)

After breakfast on the fifteenth they all set out upriver, with Clark in command of the eight heavily loaded vessels while Lewis proceeded again on foot, this time with privates John Potts and Jean Baptiste Lepage, who were too sick to help with the canoes. The next day he hurried on ahead to "the point where the river enters the Rocky Mountains, " in order to make the celestial observations needed to establish the latitude and longitude of that clearly "remarkeable" point, as President Jefferson had required of him. He was motivated also by evidence that Indians, perhaps Shoshones, had recently been in the vicinity, which he took as a sign they could expect to meet Sacagawea's people at any moment. It was perhaps for that reason that he took along his principal interpreter, the sign-talker George Drouillard.

About noon they stopped four miles short of their destination for an hour or two and observed the Meridian Altitude of the sun's "lower limb" with the octant by the "back observation." He recorded it as "Point of observation No. 30, " which is shown much too far downstream on Clark's map (Figure 3). The latitude Lewis obtained was 46°46'50.2". Had he used the correct index error it would have read 47°14'52", which would have been only about one-third of a mile north of the the actual location—probably 47°14'03".

After that, Lewis recounted,

we pursued our rout through a high roling plain to a rappid immediately at the foot of the mountain where the Missouri first enters [properly, "exits"] them. the current of the missouri below these rappids is strong for several miles, tho' just above there is scarcely any current, the river very narrow and deep abo[u]t 70 yds. wide only and seems to be closely hemmed in by the mountains on both sides, the bottoms only a few yards in width. an Indian road enters the mountain at the same place with the river on the Stard side and continues along it's border under the steep clifts. these mountains appear to be only about 800 feet above the river and are formed almost entirely of a hard black grannite.

He was mistaken. There is no granite in those mountains. Clark simply wrote that they were made of "a hard black rock." Having studied them from a distance as he approached, he added that this first range of the Rockies appeared to lay northwest-southeast, corresponding with the way he had shown them on his recent map, and Lewis concurred. At that time neither man had any way of knowing that these mountains comprise a geologically unique segment of the Rockies now called the Adel Mountain Volcanics. Measuring more than 40 miles in length and 20 in width, they consist of the eroded remnants of volcanic eruptions that began about 75 million years ago and lasted for several million years. The Adels consist mainly of lava breccias and ashfall tuffs, their colors ranging from dark red and dark grayish-green, to dark gray, weathering toward black.

at this place there is a large rock of 400 feet high wich stands immediately in the gap which the missouri makes on it's passage from the mountains; it is insulated from the neighbouring mountains by a handsome little plain which surrounds it on 3 sides and the Missouri washes it's base on the other, leaving it on the Lard. as it decends. this rock I called the tower. it may be ascended with some difficulty nearly to it's summit, and from it there is a most pleasing view of the country we are now about to leave. from it I saw this evening immence herds of buffaloe in the plains below.

By the end of the day he had to confront a more mundane and personal issue. The mosquitos had grown "extreemly troublesome." Moreover, perhaps still wracked with disappointment over the recent failure of his experimental iron-framed boat, and distracted by the excitement of reaching the "first chain" of the Rockies, he had forgotten to bring his "bier." He was utterly exasperated. "I . . . promised in my wrath that I never will be guil[t]y of a similar peice of negligence while on this voyage."

Despite the nocturnal distress those vicious little Aedes had inflicted upon him, Lewis was back on task early the next morning. "There is a large pine tree situated on a small island at the head of these rappids above our cam[p]; it being the first we have seen for a long distance near the river I called the island pine island."

Lewis and Clark: End to End

The True Story of Lewis and Clark

Trail of Lewis and Clark Adventure