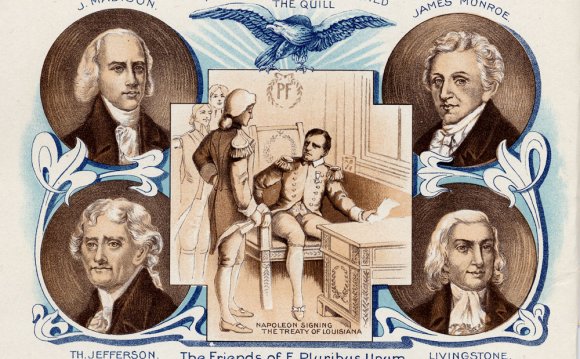 Napoleon Bonaparte seized power in 1799 after overthrowing the French revolutionary government. During this time, U.S. and French negotiators were concluding negotiations to end the Quasi-War with France. In 1802, Napoleon ended ten years of warfare with Great Britain under the Peace of Amiens. He used this opportunity to attempt to crush the Haitian Revolution, but the army he sent met with defeat. Napoleon had also re-obtained the North American province of Louisiana from Spain in 1800. However, the loss of Haiti made Louisiana strategically undesirable, and with war again on the horizon with Great Britain, Napoleon was willing to agree to the Louisiana Purchase in 1803.

As expected, Britain declared war on France in 1803, and would remain at war for over a decade. During this period of war, Napoleon and British leaders concentrated on European affairs, but the conflict spilled over into the Atlantic. From 1803 to 1806, the United States succeeded in remaining neutral, but suffered from impressment, British seizure of British-born naturalized U.S. citizens into the British navy. President Thomas Jefferson sent William Pinkney and James Monroe to negotiate a treaty that would halt the impressment of American sailors, but when the signed treaty came back without any British concessions on the impressment issue, Jefferson did not pass it on to the Senate for ratification.

In 1806, Napoleon issued the Berlin Decree, which forbade trade with Britain, and the British Government responded the next year with Orders in Council, which instituted a blockade of French-controlled Europe, and authorized the British navy to seize ships violating the blockade. Napoleon responded with further trade restrictions in the Milan Decree of 1807.

U.S. relations with Great Britain became increasingly rocky during this period. On June 22, 1807, the H.M.S. Leopard bombarded and forcibly boarded the U.S.S. Chesapeake off Norfolk, Virginia in search of British navy deserters. President Jefferson responded with an embargo on all foreign trade in an effort to weaken the British economy. The embargo was extremely unpopular in New England, where the economy was heavily dependent on trade with Britain. Moreover, the British economy was not strongly affected by the embargo, which proved difficult to enforce. In early 1809, in one of his final acts as president, Jefferson replaced the embargo with the Non-Intercourse Act, which allowed trade with other nations except Britain and France. This act also proved virtually impossible to enforce.

Jefferson’s successor, President James Madison, confronted a dilemma—to continue with the ineffective Non-Intercourse Act was effectively to submit to British terms of trade since the British navy controlled the Atlantic. Madison was assisted by the passage in 1810 of Nathaniel Macon’s Bill No. 2, which offered Britain and France the option of ceasing their seizure of U.S. merchant ships in return for U.S. participation in their trade bloc. Napoleon was the first to offer concessions, which Madison publicly accepted at face value despite his private skepticism. In doing so, Madison pushed the United States closer to war with Britain.

During this period, Madison also had to address a problem created by Secretary of State, Robert Smith, who had personally stated to the British minister his pro-British sympathies. When Madison confronted Smith and offered him a graceful departure as U.S. Minister to Russia, Smith appeared to accept his offer, and then leaked cabinet papers as part of a smear campaign against President Madison. U.S. diplomat Joel Barlow published a reply and swung public opinion against Smith, who resigned on April 1, 1811.

Relations with Great Britain continued to deteriorate. A U.S. Navy ship mistook a much smaller British ship, the HMS Little Belt, for a British Navy ship that had impressed American sailors and fired upon it. Consequently, Thomas Foster, British Minister to the United States, stated that Britain would not offer any compensation for the 1807 Chesapeake incident. Foster also informed Madison that the British Government would not revoke the Orders in Council. By the spring of 1812, Madison had decided upon war with Great Britain—although he also considered declaring war on France as well. Congress passed a declaration of war on June 17, which Madison signed the next day. The war continued into 1815, although diplomats signed the Treaty of Ghent on December 23, 1814.

The Napoleonic Wars marked a period of U.S. weakness in the face of British power. However, in the postwar period, British policies began to soften, leading to the Rush-Bagot agreement and the Convention of 1818.

Eagles Cry A Novel of the Louisiana Purchase (Unabridged ...