Date of the Louisiana Purchase 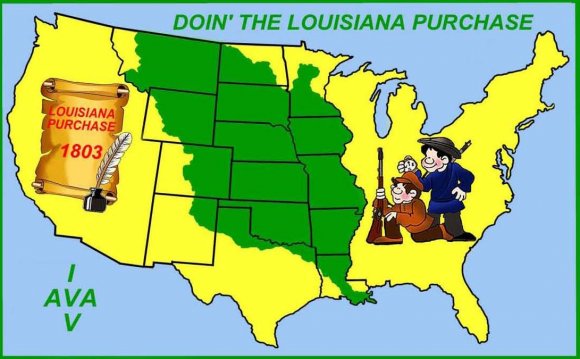 Louisiana Purchase summary: The United States bought 828, 000 square miles of land from France in 1803. The French controlled this region from 1699 until 1762 when it became Spanish property because France gave it to Spain as a present, since they were allies. But under Napoleon Bonaparte, France revived the aspirations to build an empire in North America so the territory was taken back in 1800. However, those big plans were not meant to be because Napoleon needed to concentrate on preparations for war with the British Empire and so the land was sold to the United States. The price was 15 million dollars.

The purchased territory included the whole of today’s Arkansas, Iowa, Missouri, Kansas, Oklahoma, and Nebraska, parts of Minnesota and Louisiana west of Mississippi River, including New Orleans, big parts of North and northeastern New Mexico, South Dakota, northern Texas, some parts of Wyoming, Montana, and Colorado as well as portions of Canadian provinces Alberta and Saskatchewan.

Thomas Jefferson was the American president at the time of the Louisiana Purchase. The United States initially wanted to buy only New Orleans and the land around it. The purchase met with the strong opposition in the States on account of being unconstitutional. Those accusations were accurate, at least to some extent. President Jefferson couldn’t deny that the Constitution of the United States did not provide for acquiring new territories but still he decided to proceed with the purchase since the removal of French presence in the region was such an important issue.

REENACTMENT OF THE LOUISIANA PURCHASE AT BURNING MAN 2011

The Story of the Louisiana Purchase