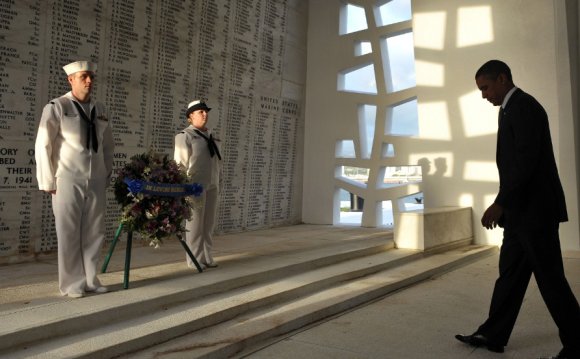 Click image for larger view: The USS Shaw is hit by three bombs which exploded in the forward magazine during the attack on Pearl Harbor on December 7, 1941.
Records of the Joint Committees of Congress, Record Group 128

On the morning of December 7, 1941, Japanese bombers staged a surprise attack on U.S. military and naval forces in Hawaii. In a devastating defeat, the United States suffered 3, 435 casualties and loss of or severe damage to 188 planes, 8 battleships, 3 light cruisers, and 4 miscellaneous vessels. Japanese losses were less than 100 personnel, 29 planes, and 5 midget submarines.

The day after the attack, before a joint session of Congress, President Roosevelt asked Congress for a declaration of war against Japan.

The Radar Plot of Detector Station Opana was an exhibit of the Joint Committee. The 22 x 31-inch radar plot was made by Private Joseph L. Lockard at the Opana Radar Station on the morning of December 7, 1941. It indicated a large number of aircraft approaching the island of Oahu. The control officer believed the radar signals announced the approach of American B-17s scheduled for arrival the same day, but the signals actually tracked the first wave of Japanese bombers and torpedo planes that attacked Pearl Harbor.