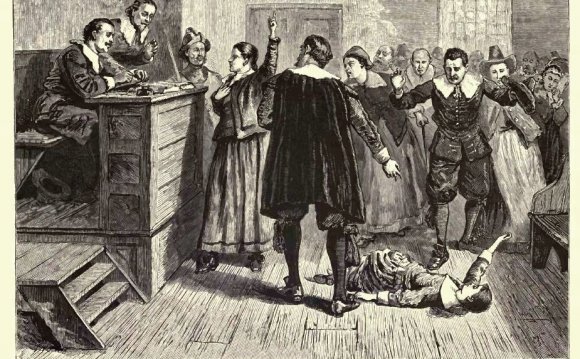 William Penn arrives in America on the ship Welcome and founds Pennsylvania. A Quaker, Penn promotes religious freedom in the colony that he creates as his "holy experiment." Pennsylvania will become a refuge for both Native Americans and people of various religious denominations who are being persecuted elsewhere.

The Charming Nancy sets sail for North America from the Netherlands with 21 Amish families. Over the next three decades, about 100 families will make the crossing.

Over the next 50 years, 3, 000 Amish will immigrate to North America from Europe.

Amish begin settling in eastern Ohio, farming side by side with the Native Americans already there. Twenty five years later, this community will consist of approximately 250 Amish families.

A one-room schoolhouse in Pennsylvania

Communities in Pennsylvania and around the country establish one-room public schools, which typically run through the eighth grade with one teacher for all students. In many areas, Amish and English children attend the same schools and leave around age 14 to work on their family farms.

Amid Amish settlements, various churches debate over dress code, separation from society, and use of technology such as photography. The intensifying debates culminate in the first all-church Amish ministers' conference in Wayne County, Ohio (Diener-Versammlung), which will occur almost annually until 1878.

The more conservative Amish depart this year's Diener-Versammlung dissatisfied and trigger a gradual but major division within Amish communities in North America. For the first time, the more conservative flank becomes known as "Old Order" Amish because they cling to the Old Ordnung. The more progressive Amish become Amish-Mennonites, and slowly over several decades become assimilated into Mennonite churches.

The Egly Amish form under Bishop Henry Egly from Adams County, Indiana. Egly mixes evangelical sentiments with the beliefs of the Amish, promoting personal conversion, and takes a more personal authority over the congregation.

The Stuckey Amish form under bishop Joseph Stuckey from McLean County, Illinois. They allow excommunicated members from other communities to join, are more relaxed in their restrictions, and believe God will save all of humanity regardless of religious affiliation.


A 1909 headline in Utah's Ogden Standard

About 1.4 million telephones are in service across the country, including some in Amish homes. "Party lines" are shared by multiple families, and several Amish groups begin debating the dangers that home telephones present to the community.

At this time, the Amish population in America numbers around 6, 000 and over the next 30 years it will more than double. While still concentrated in Pennsylvania and the Midwest, new Amish settlements are growing in Kansas, Ohio, Michigan, Iowa, Oklahoma and Delaware.

About 20 percent of the Old Order church in Lancaster, Pennsylvania break away and form a new Peachey group, which will later join the Beachy Amish. The new Amish group does not agree with the Old Order's ban on telephones in the home and the strict shunning policy.

Old Order Amish communities across North America decide, over several years, to forbid telephones in their homes, although using a public telephone is permitted.

They also gradually begin to ban the ownership of automobiles, citing the risk that car ownership would encourage urban contacts and pull their community apart. Most Amish can still ride in a car as passengers under certain circumstances, but they may not own or drive one.

The U.S. begins a national conscription service; some Amish boys receive exemptions for farm deferments as conscientious objectors, but others are required to report to Army camps. Drafted Amish who refuse to enter armed service are sent to the Army camps for non-combatant service and are often subjected to abuse.

Some members of the Amish community express concern over Amish boys being pulled away from the church and not returning to their home communities following their service.

Over the next 10 years Amish communities ban connection to the electrical grid. However, they continue to use electricity from batteries, which was never forbidden.

By this time, the Old Order Amish population in North America is nearly 10, 000.

Five Amish fathers are arrested in Holmes and Wayne counties of Ohio for disregarding the Bing Act by keeping their teenagers at home.

Over the next 20 years, Old Order Amish communities ban the use of tractors and other self-propelled farm equipment in fields. New technology and equipment may be used in the field if it is pulled by horses or mules.

The state of Pennsylvania begins to consolidate its public school system, closing down many one-room Amish schoolhouses.

Around this time, the Beachy Amish begin buying and driving their own automobiles. Crossing this cultural boundary excludes them from the horse-and-buggy driving Amish.