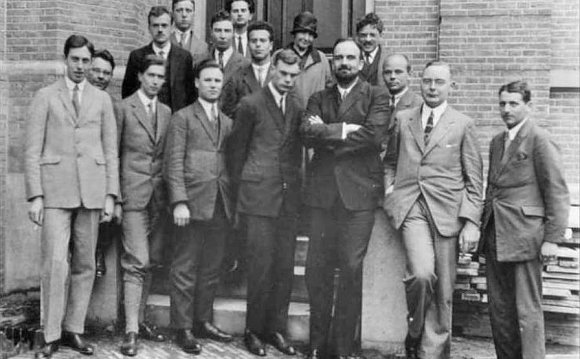 In 1934, German scientists discovered nuclear fission, the splitting of an atom of uranium into two elements. If fission became a chain reaction, the energy of the nucleus of the uranium atom might be released. A very large number of atoms split very quickly might result in a massive explosion. Five years later, Albert Einstein wrote a letter to President Roosevelt describing the potential power of a nuclear bomb. Einstein was a German-born Jewish scientist who left Europe shortly before Hitler came to power. Einstein opposed the use of nuclear weapons, but he feared what might happen to the world if Germany discovered the technology before America.

American military leaders decided they needed to build a laboratory to create a nuclear weapon. They searched for a location at least 200 miles from a coastline or international border. The site needed to be sparsely populated because an accident might cause horrendous damage. They settled on a secluded school for boys in the desert land of Los Alamos, New Mexico. Robert Oppenheimer led a group of almost 6000 scientists in what became known as the top secret Manhattan Project.

The scientists recruited to work on the Manhattan Project, and their families, had to work in complete secrecy. Their drivers’ licenses listed only numbers, not names. Even relatives could not know where the scientists were working. All of their mail was screened to ensure they said nothing to give away their location. Photographs could not include anything that might identify the landscape of New Mexico. The American government had to ensure that the Axis Powers had no idea what was happening at the isolated site in New Mexico.

Many of the scientists working at Los Alamos were Jewish refugees from Germany. Edward Teller left Germany for America in 1933. Otto Frisch and Felix Bloch were also German Jews who were instrumental in creating the bomb. Enrico Fermi was married to a Jewish woman. He left Italy at about the same time to escape anti-Semitism. Ant-Semitism is the hatred or persecution of Jews. If Jewish scientists had been allowed to stay in Germany, Hitler might have gotten the bomb before America.

Nobody was certain what would happen once the nuclear chain reaction began. One scientist believed the entire state of New Mexico would be incinerated. The governor of New Mexico was alerted that an evacuation of the state might be necessary.

The scientists were ready to test their work at sunrise on a summer morning in 1945. The awakening sky filled with light brighter than anything seen before on earth. Early risers more than 150 miles away heard the unimaginable roar of the bomb. Oppenheimer later remarked, “We knew the world would never be the same.”

A photograph of the Trinity Test, the first detonation of a nuclear device

J. Robert Oppenheimer was the leader of the Manhattan Project

Los Alamos is about a 45 minute drive from Santa Fe, the state capital of New Mexico

This plant security sign was in Milwaukee, but there were similar signs in Los Alamos reminding workers of the secrecy of thir mission.